JULY FROM DEPTFORD TO SAVILE ROW


Perhaps July belongs to the big boys: Lowry, Hume and Caulfield at the Tate; Donald Judd at David Zwirner, Robert Irwin at Pace, Per Kirkeby at Michael Werner and a pellucid survey of greyness at  Skarstedt as the new American galleries get into their stride.   Ignoring all that, then,until we get to Jutta Koether at the end of a dozen, let's start with a fourfold exploration south of the river, and move on to the threatened Cork Street and its potential successor, Savile Row.


The Enclave run of galleries – just 6 minutes from London Bridge -  has a fine set of shows, notably Nadege Meriau’s attempt to save the world with mushrooms (Anarch); Stefan Hoerlein’s infra-red sex in a Dusseldorf park (news of the world) and Lubomirov-Easton’s pairing of artist-curators with an artist of their choice, which makes for a highly cohesive show with such as Gordon Cheung (campfire sticks out of  the Financial Times) choosing his very estimable assistant Sayshun Jay (an exacting four screen video animation in a wooden structure); Richard Ducker with the late Charles Mason; a walk-through Frances Richardson; and a peer-into Matt Hale which ruptures the painting's surface in a new way while also seeming to set it in a functional context. 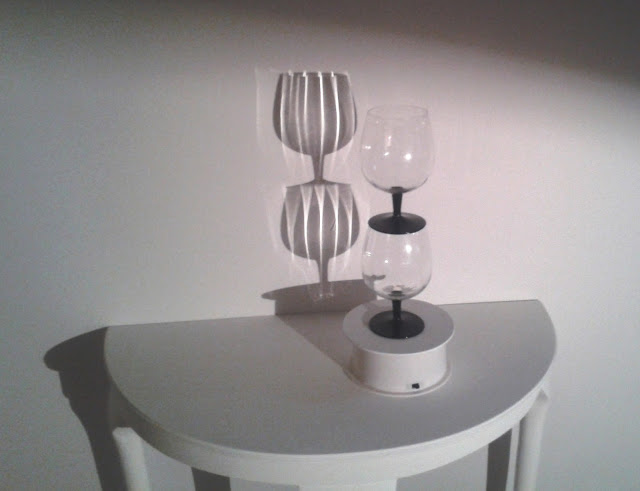 Helen Maurer uses light, glass, mirror and shadow to transform mundanity into a beauty which persists beyond our solving its quotidian origins. For her latest show in Danielle Arnaud’s elegant domestic space, she pares back her language somewhat by restricting the colour in the downstairs projections, and by showing just filmed results upstairs. Either way, the flashy deceptions of much surrealism are replaced by the gentler washes of a meditative underwater calm.

I'm normally careful not to quote press releases, which is fairly pointless when they're bound to be biased, and you can read them anyway. But that on Chris Sharp's Notes on Neo-Camp captures this fascinating conjunction of 13 artists exactly: 'their work shares a highly sensual and plastic sensibility, which alternates between coy understatement, as in the paintings and sculptures of Daniel Sinsel, and erotic bombast, as seen in the paintings of Ella Kruglyanskaya' (she's said her egg tempera women are ready to burst, existentially). 'This work is aware of the impossibility of a return to Victorian sublimation, and as such, wilfully indulges in a kind of sublimated desublimation'.

This isn’t an easy sell: complex work with an unfashionably religious aspect  titled from the uncompromisingly intellectual poet Geoffrey Hill. All the more reason to point out that Man & Eve’s spacious new location is well worth a visit for this lovingly curated conjunction of typewriter paeans by Benedictine monk dsh (Dom Sylvester Houédard, 1924-92), votive video appropriations by fellow-priest Mark Dean, poised sculptural enjambments by Anna Sikorska  and Aliki Braine’s rigorously pure form of praise for the photograph as object, made from negatives in which she’s punched holes to personalised multi-moon effect.  Good for the soul, even if - like me - you haven’t got one…

Just when you may have thought Cork Street as an art hub was being killed off by landlord problems, the site of the  former Petleys (which I thought had closed for just those reasons) has become the Gallery of African Art. The lively launch show presents 16 big paintings from over the last decade by the California-based Ethiopian Wosene Worke Kosrof, who for 35 years has applied an improvisational jazz-like sensibility to the use of his native 228-symbol Amharic language. Some have a hint of landscape into their abstraction, others - as above - feel closer to musical scores.


If the art is to be moved on from Cork Street, that could simply add to the burgeoning gallery population of Savile Row, a few yards east. There, Chicago-based John Henderson takes the artist's conventional desire to develop a signature style, and applies it with some irony to his means of production rather than the outcome. Film of him sweeping his studio turns the floor into a Pollock of sorts;  the final form of his painterly gestures is to be cast into marble dust and resin; and camera's pan across distressed brickwork generates the tropes of abstract paintings, whereas, when Henderson does work with paint on canvas, he plays with the very edge of the featurelessly generic.


To 3 Aug: www,allvisualarts.com
AVA shines its dramatic lighting style on contrasting sculpture and painting, both with high labour inputs for high intensity outputs. Alastair Mackie applies his maximum precision natural history minimalism to snakeskin mounted on aluminium tubes, eggs nestled in box grids, and complex hexagonal systems of interlocking cuttlefish bones. Dolly Thompsett stars in the parallel painting show: her hallucinatory scenes play off and reuse a ground of patterned textiles to ambiguate their spaces, both in filmic landscapes and in a new all-over style with an intestinal twist. Just what does really matter in life, you might ponder as you disentangle the layers, and what is mere surface effect?

There’s a frenetic melancholy to this distinctive show, which captures – yet  through its preservation transcends – a sense of Dieter Roth’s 20+ active hours a day (he didn’t sleep much). There are orthodox diaries, but also 700 files each holding 20-odd items from a day’s waste; records of scribbles and notes  made by all-comers on his studio tabletop; and the 131 TV monitors of  Solo Scenes  present Roth in his last year, reading, working, eating, shitting  -  a paean to the unedited which Sean Ashton’s accompanying essay terms ‘rhopography’. The closest we get to orthodox painting are the Kleiderbild -  three self-portraits by means of Roth’s clothes mired in glue.

Hauser & Wirth goes Japanese in this handsome survey, which  fits the literal meaning of 'Gutai' ('embodiment ') and its 1956  Manifesto statement that: 'in Gutai art, the human spirit and the material shake hands with each other, but keep their distance.'  Matsutani's practice is tracked from early 60s explorations with the curious material of vinyl glue (often with air blown into it so it acts as sculpturally-charged  paint), through to  recent intensely meditative graphite works, often made over the shapes made by glue: since he moved to  France in 1977. Matsutani has worked exclusively with black. In all phases this is highly tactile work, the obsessive repetition of which represents the flow material, time and the self.

This show highlights Cornelia Parker’s ‘Queen of Hover’ mode, usually achieved by suspending objects in space - as in her famous exploded shed and squashed silver pieces. ‘Unsettled’ is a beautifully poised new work of this sort, in which planks which seems at first to be set on the floor and leaning against the wall prove to be held just above the floor and not quite touch the wall. But her hop-scotch-tempting bronze casts of the cracks between paving stones are a tease: they’re raised on nail-like legs to similar effect.  And if you happen to be at the RA;s Summer Show, Parker provides three of the wittiest pieces there: an elephant-made sculpture, a drawn out tooth and a play on the red dots of sold works

Kevin Broughton and Fiona Birnie take things to the max and that persuasive bit beyond through scores of paintings, collages and masks (plus cabaret performance 13July) on the theme of how the present interferes when we revisit the past. A darkened ‘Collector’s Room’ picks up on the sale of forgeries to the Nazis by reworking classics to incorporate the internet age: Delaunay’s windows with a Windows logo, an Ensor figure browsing for porn… The next room is reserved for the notorious Degenerate Art exhibition: as its contents are known only through black and white photos, versions are painted that way on top of 1930’s German currency and lottery tickets, giving the weirdest of spins to Klee, Beckmann and Kandinsky. A feel good show, for sure, but with the dark suggestion that our electro-frentic age bears comparison with the tailspin of Weimar Germany.


Jutta Koether is - like Michael Krebber and Merlin Carpenter - a former assistant to Martin Kippenberger who has taken forward his interest in how painting links to broader networks.  The results are unruly, but include a distinctive painting style seen here in a jocularly large phallus which might be taken to mock the pretensions of the heroic male artist, especially as it’s opposite a basin containing gift shop items including a rather vaginal scallop shell, and streaks of colour on torn canvas strips suggestive of a destroyed painting.  Add a group of plank works rammed vertically into the stairwell, and a video showing a wider range of Koether’s work and related performances, and this provides a good primer on the New York-based German’s complex practice, even if you don't try to work out how it constitutes ‘an ongoing performative reading’ of Derrida’s 1969 lecture ‘The Double Session’.