SMALL BY BIG IN OCTOBER


What to choose in such a busy month? Most major spaces have a smaller gallery nearby. And so I start with a few small shows close to rather bigger venues with which they might well be combined. Only in passing, then, do I mention that the Tates, Hayward, Camden, Serpentine, Sadie Coles, Hauser & Wirth, Victoria Miro, David Zwirner etc have new shows well worth seeing. Let's start near - not to mention in, the Royal Academy...

Mark Tobey (1890-1976) may have roamed the world - living in Wisconsin, New York (where he converted to faith-unifying Bahá'í religion in 1918), Japan, Seattle and Basel – but he developed trend-preceding ‘white writing’ style of all-over abstraction in Devon in the mid-thirties. Yet he’s rarely shown  here, making this 30-strong presentation of his multi-layered, ethereal paintings and drawings a rare treat. Tobey aimed to use line to unify nature, science and art, with results akin to abstract expressionism with the brash heroics replaced by meditative intimacy. Moreover, this is not just near the RA’s Australian survey, but in the same building as George Grosz at Richard Nagy. What more could you want, a free catalogue? OK then…


It’s the current fashion to theme shows around the Wunderkammer: the last Documenta, the current Venice Biennale, Rosemary Trockel’s recent Serpentine show, the Arts Council  touring shows now at Margate and Bexhill…  Colnaghi’s take is two rooms as big cabinets with actual cabinets inside them. It’s a happy combination of ancient discoveries and current riffs on the: Jonathan Delafield Cook’s lifesize charcoal detailing of a narwhal tusk next to the real thing; Steffen Dam’s technically amazing specimens in jars, all out of glass, by vintage pickled animals; Natasha Daintry’s use of blue underglazing to make tattooed vases alongside their Ming and Delft inspirations. And pretty close to White Cube’s Ham Steimbach show, in which he presents objects, not on his usual shelves, but in cabinets… 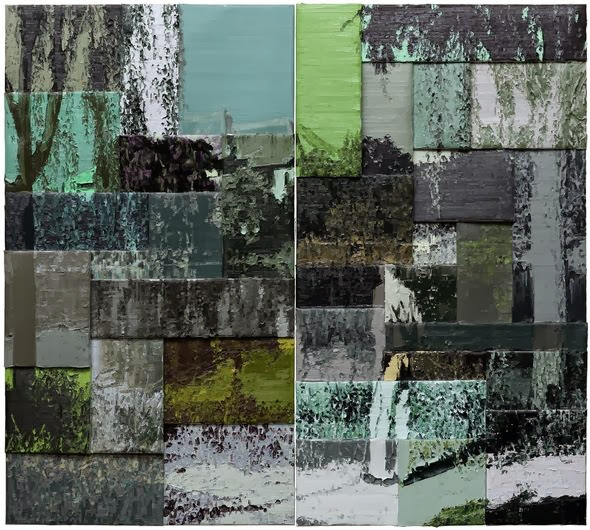 It’s not easy to achieve a wow factor in straight painting, but the vast, multi-panelled constructions of leading Chinese Li Songsong do just that in his first major London showing – and with a conceptual purpose. Appropriated images are divided up into units which Li Songsong tackles separately, painting them so thickly they tend towards abstraction. Recombined, the balance of fragmentation and unity suggests the complexities and ambiguities involved in China’s political history and rapidly changing society. 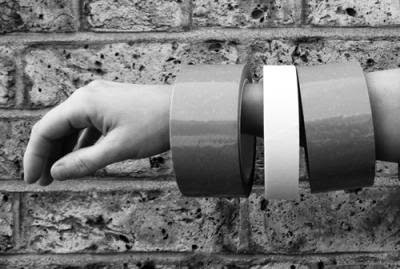 Ciara Phillips, a Glasgow-based printmaker who turns her skills to context-specific and collaborative ends, will be resident at The Showroom for two months, engaging in its programme’s characteristic community engagement. All that’s built on a very smart show already in situ: a twelve metre abstract swathe bearing months of printing acts as stage curtain, while multiple silkscreenings of letters and shapes are set against a wallpaper of wrists wearing sellotape as bangles: the artist dressed in her tools.  And all a handy couple of streets from Tatsuo Miyajima counting down life at the Lisson Gallery. 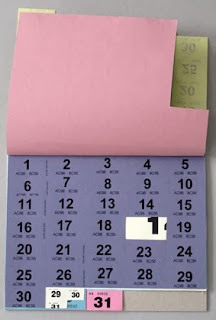 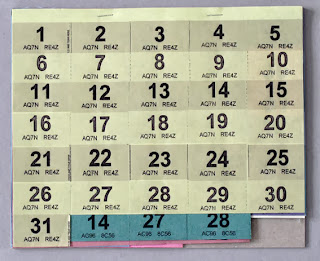 Suppose you plan to go to Sarah Lucas’ retrospective at the Whitechapel. Good idea – but why not go on a Saturday, and pop round the back to a succinct retrospective from Sara MacKillop, retro-minimalist of office life? The main theme is the typewriter, ,manuals on for which get into sculptural modes, ribbons from which fall down the walls, books on which include one on Oldenburg’s soft version. But there’s also a chance to browse twenty of MacKillop’s own booklets, elegantly re-purposing envelopes, coloured pencils, faded paper, photocopied instructions and strips of lottery tickets as quietly insistent art.
_____________________________

Tintype opens its new space with Jo Addison’s gently satisfying sculptural tweaks in pursuit of the essence of things. A jesmonite cloud seems to carry the memory of being rained on by a rainbow; the conundrum of ‘Knotty’, in which thread life pokes  through cracks,  is enlivened by what sounds like the interesting new material ‘ply, wool’;  ‘Borl’ could be its homophone, but cut to pieces and mis-reconstructed as geometry. Look out, too, for Addison next up 5-6 Oct –see housemcdonaldwatson.wordpress.com ) in Alex McDonald and Anne-Marie Watson’s innovative weekend-long shows located in artists’ houses.


If you think there’s a God, how do you solve the problem of the evil He allows? You must, I think, believe in free will and the existence of a comparably powerful Devil. One virtue of Milton’s epic Paradise Lost is how powerfully it dramatises those necessities. I don’t believe in God, but Maria Marshall does, and it’s that sense of what underlies apparent innocence which gives her films, which often feature her children, their edge. Here Marshall follows a museum retrospective in Brussels with a concentrated selection of painting, film and photography in a temporary space at the end of the road where she lives. True, Charlotte Schepke's Large Glass is no behomoth, but it's very close and also interesting. 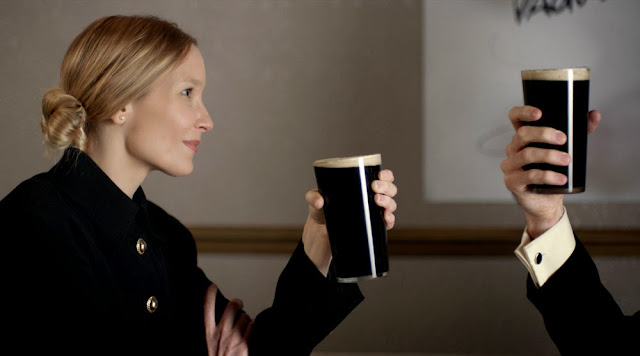 The tricky subject of dull evenings down the pub is introduced by Rachel Reupke’s deadpan drawings of beer at Cell, which let on to a twenty minute film with long near-static shots of people drinking, and no sound – all dialogue is by captions after the speech acts. So why watch? The images are based on advertisements for alcohol, the speed is that of a bad date, and for all drink’s reputation for lifting inhibitions, body language and words indicate that communication is failing. It makes for a curiously hypnotic pairing of alcoholic consumption and romantic love as less than satisfactory products of ideologies. Maybe you should both go – it might give you something to talk about… And close to the excellent Phoebe Unwin show at Wilkinson. 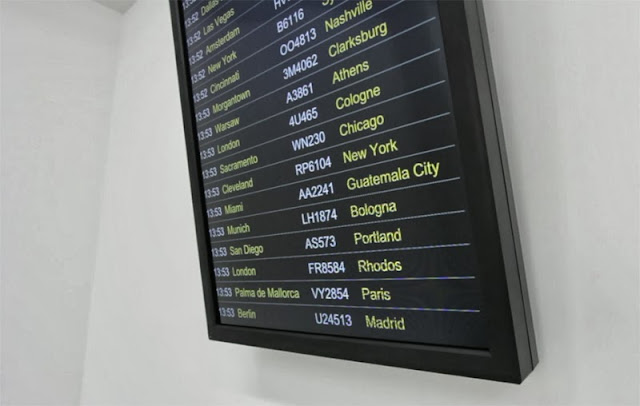 At any one time some 400,000 people are flying: Martin John Callanan’s first solo show at noshow gives us the environmentally troubling details via a worldwide live departures board on which 20-50 planes per minute (depending on the time of day) trump memories of long waits for one particular flight to come up. The elegantly futile representation of data skimmed off the top of complex underlying systems or events is also seen in Callanan’s newspaper listing all the wars, conflicts, rebellions, insurgencies during his lifetime – as classified, in case you wonder at the differences, by the UN.


London-based New Yorker Michael Ajerman has said he aims at ‘aggressive surface control’ in his paintings, which are typically  psychologically dark with a twist of wit. Half this show consists of  half of the ten results to date of an annual ritual he has adopted: painting a pumpkin. A breathing space which acknowledges his home country, they’re fluid and variable. My favourite, titled for being rotten, had a power drill taken to its meaty slump. Ten notes from time’s passing in exile?

Images courtesy the relevant artists and galleries.
Posted by Paul Carey-Kent at 13:22