Parisian painter Bernard Piffaretti winningly combines durational performance, playful conceptualism and joy in paint. The title of his Berlin show pointed to the long-running, fundamentally unchanging and slightly obsessive nature of his practice, which might be compared with On Kawara or Roman Opalka. For 25 years he has been following a three-step procedure: first he makes a vertical  division down the middle of his canvas, then he paints abstractly on one side or the other; then he attempts to reproduce that side on the other half. We wonder which came first: as Piffaretti has pointed out ‘the state of difference and repetition in my painting inevitably conjures a thought about time’. It might also remind us of Robert Rauschenberg’s famous Factum I and Factum II, 1957. But here we have one painting, not two, and Piffaretti doesn’t attempt to make a mechanical simulacrum of a spontaneous mark – as was Rauschenberg’s approach. Rather, he re-enacts the thought and spirit of the original, so that, for example, the equivalent procedure may result in a comparable splash, but it’s unlikely to look optically similar to the first such mark. 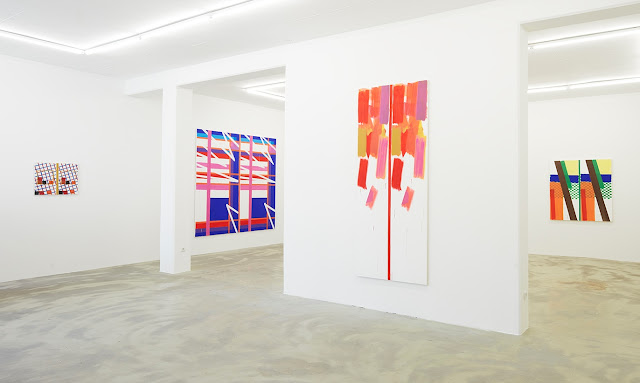 Piffaretti’s process is in a sense the subject of his paintings, and also provides a rich basis for contemplation. As he starts at random on either side of his vertical division, the viewer cannot tell which came first, and so can’t work out which is ‘a copy’: usual hierarchies are circumvented. Oppositional thinking is gently mocked, and while Rauschenberg foregrounds the face-off of the creative right side and the analytic left side of the brain, that contrast takes a subtler form in Piffaretti, tempered by the physical similarity of the two processes as actions. One might also ask: are these abstract or representational paintings? It seems obvious that one – unknown – side is abstract, but the other is actually a representational depiction of an abstract painting. Another opposition is dissolved. Moreover, Piffaretti sometimes samples previous motifs in new paintings, both from day to day (as he starts in response to the previous painting) and across the years - imitating at the macro level of the oeuvre as well as the micro level of the individual painting. 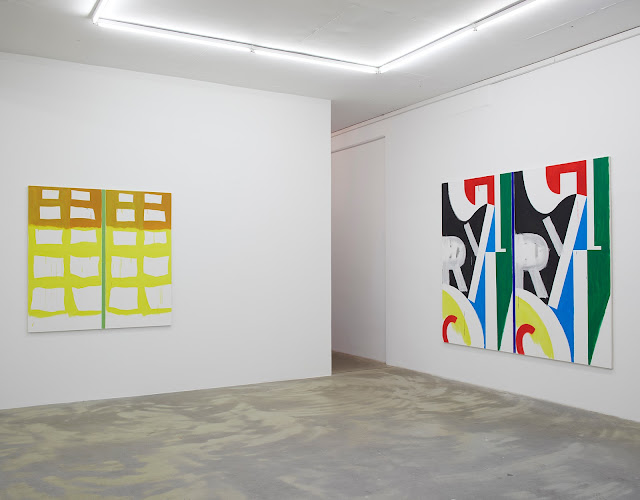 As for the paintings themselves, they use a casual, almost study-like handling of unmixed colours to lyrical, slightly poppy, sometimes somewhat comic ends. Piffaretti is at ease in his constraints. Matisse is in there in the colour dance between the two halves, which might even stretch into the sexual territory of searching for a mate.  Klemm’s throw some 1988 and 2002 works into a mainly 2016 mix, demonstrating the ongoing freshness of the project.  ‘The critical moment in my paintings’, says Piffaretti, ‘is the first mark down the middle, which declares THE SURFACE IS HERE’, and the selection at Klemm’s was a good illustration of the different effects the central line can have. It makes a big difference whether its colour is found elsewhere on the painting or not. And, for example, if both sides are relatively symmetrical within themselves, the line relates similarly to each side of the painting, so acting as a neutral divisor:


Where the line divides chromatically varied, asymmetrical units, ‘twinned’ marks appear differently due to their differing distances from the now-rogue colour of the central line, for example the dark orange here has a different dynamic when close to the central green:

And sometimes the dividing line is very like a line within the duplicated composition, causing it to become integrated into what looks like a unified single image:

You might ask whether, after thirty years, Piffaretti needs to move on from his formula. The question is no more appropriate than asking the run of artists why they don’t start painting everything twice.

It costs 7,500 Euros to be one of the 54 galleries in the Berlin Art Weekend programme, so getting on the map, in the impressive catalogue and served by the VIP cars. You might see that as a lot of money to put on a show in your own gallery, or as a cheaper means than an art fair to increase the gallery’s exposure to the right sort of collector – a particular necessity, perhaps, in Berlin, given that the local collector base – as opposed to the local artist base - is generally held to be thin. Of course there are hundreds of galleries in Berlin, and I guess it’s a sign of the Art Weekend’s success that a couple of other groups organised themselves into satellite art weekends on the back of the big one. Nonetheless, the official 54 include the big hitters. I got to 47 of them, and the quality was generally excellent.  If there was a trend, it might have been somewhat conservative choices, not very much film, and the near-absence of directly political work. One exception to that was at Barbara Weiss, where Maria Eichhorn's Lexicon of Sexual Practices required visitors to ask the projectionist to screen their choice from a menu ranging from Male Masturbation to Ear Licking. That said, Eichhorn (who has just closed the Chisenhale Gallery in favour of a staff holiday) deals with issues of representation, and they were generally prominent: for example, doubling and  the difference between original and copy: 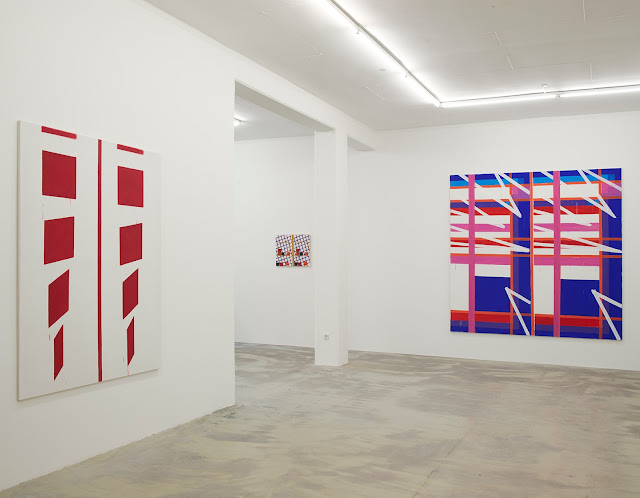 Bernard Piffaretti, at Klemm’s, proved there’s plenty of life left in his long-running practice of painting similarly either side of a dividing line. 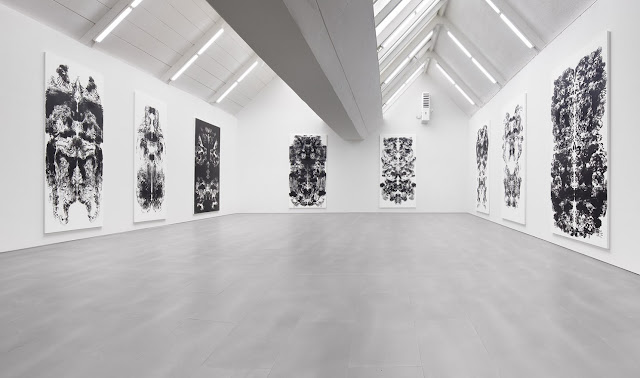 Mark Wallinger showed eight of his monumental ‘id Paintings’ at carlier / gerbauer (others can be seen in London) in which he paints simultaneously with left and right hands to reach a  doubled Rorschach-like image. 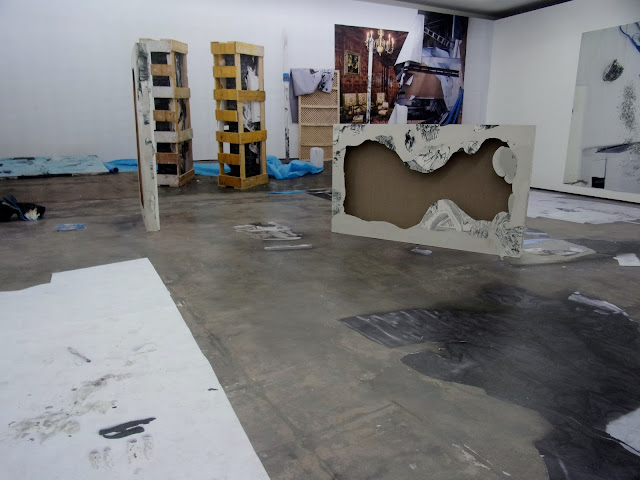 Peles Empire complicated their long-running use of a multi-styled Romanian castle to drive their art by replicating Wentrup gallery’s own features and inserting that into the mix  - so that we stood, for example, on a photographic copy of the floor. 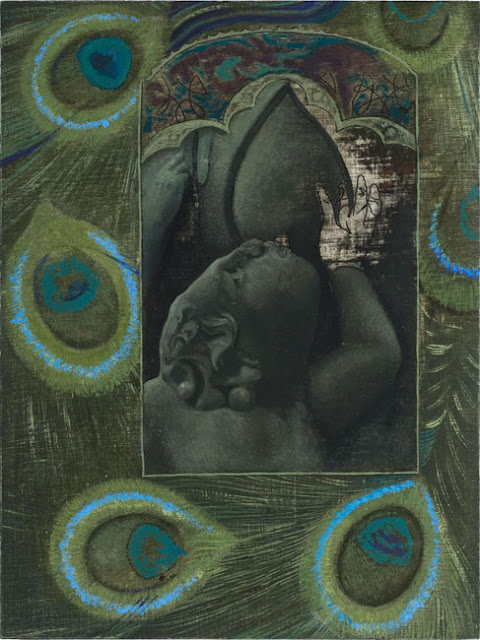 Victor Man had two solo shows (at Plan B and at Gallery Neu) of historically based, ineffably atmospheric existentialist paintings. He does gloomy tonalities brilliantly, and included two versions of Early Paradise 2015-16, either side of a doorway at Plan B:  essentially the same, but differently (un)finished.

Here are another ten I was pleased to see - nine in the official programme plus one choice from other galleries - and my favourite institutional show: 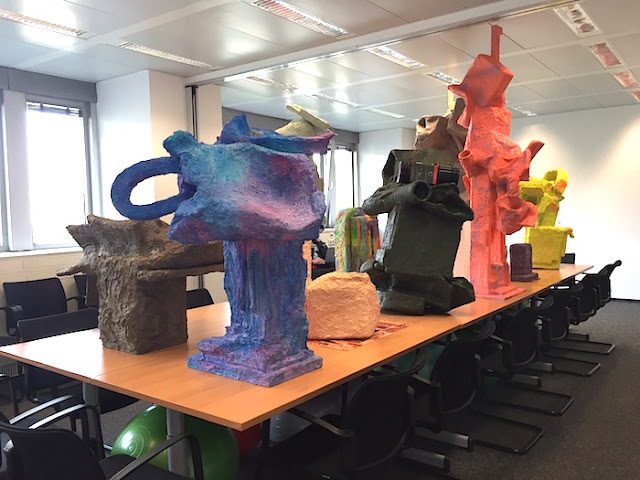 Rachel Harrison at Kraupa-Tuskany Zeidler: a bureaucratic setting featured a home-made gym and sculptures satirising means of improving business efficiency – with items such as stress relieving supplement pills, mouse pads and office-friendly sit-up facilitator installed as the agenda on a  table in a typical conference room. 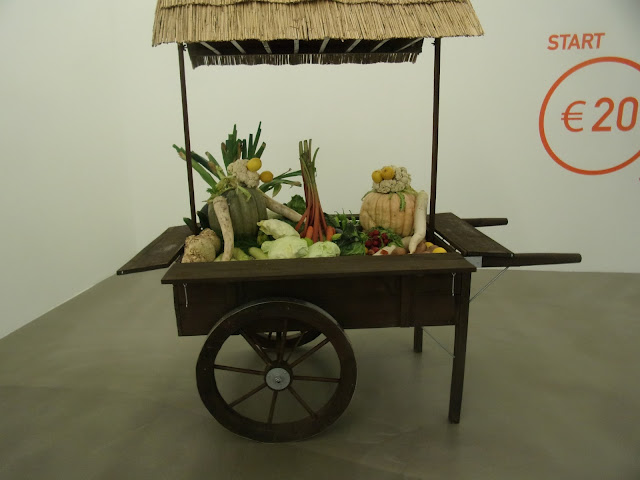 Ed Fornielles at Arratia Beer: the LA-based Briton (soon to move to Canada) concentrates on self-management in a less corporate context – through diet – and on his self-identity as a fox (the choice of a Japanese cartoonist to whom he sent his picture) in film, sculpture and a  display in which vegetables form other characters. A dietary starter pack was on offer for 20 Euros. 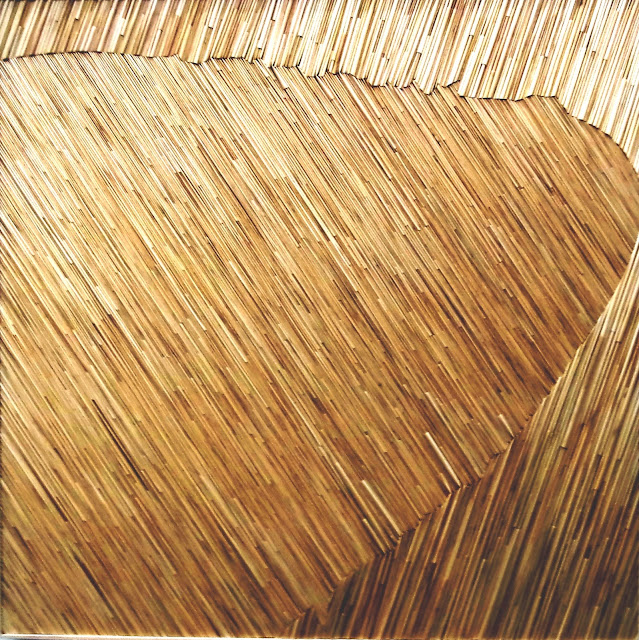 Olaf Holzappel at Daniel Marzona: all sorts of commentaries might be read into  the German’s use of straw: tradition and modernity, nature and culture, environment and our impositions on it. But they also worked really well as pure paintings. 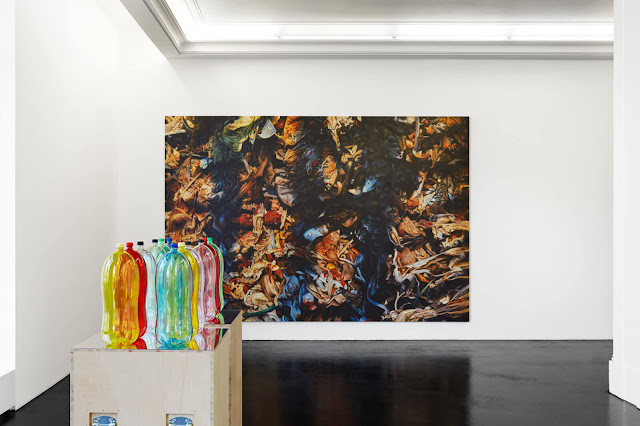 Mike Bouchet at Peres Projects. The American artist continued his commentary on consumption with a spectacular combination of input and output – big paintings of hundreds of waste items, their somewhat dulled colours explained by the sludge having just been drained away, together with outsized and colourful glass versions of coke bottles complete with nipple-textured caps. 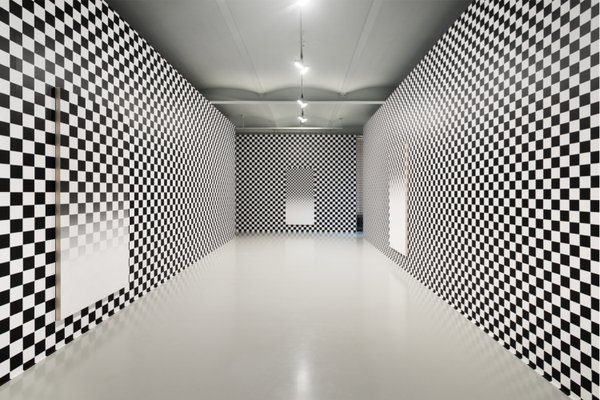 Philippe Decrauzat's 'bright phase, dark phase' at Mehdi Chouakri: a mesmerising two room installation in which false walls became paintings with paintings (through the application of  vinyl), and contrasting lighting and varying sizes of chequerboard patterns transformed the space. The dark room also contained a film of swirling coffee presented as abstraction. 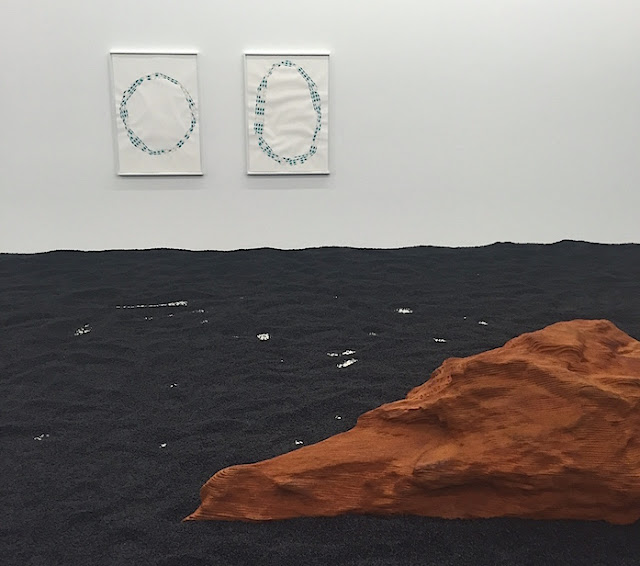 Alice Channer at Konrad Fischer: a persuasive sculptural investigation of the fold and of inside and outside, set in a sea of entertainingly slippery polystyrene regrind which acted as a plinth of sorts, changing both our and the sculpture's relationship to the floor. 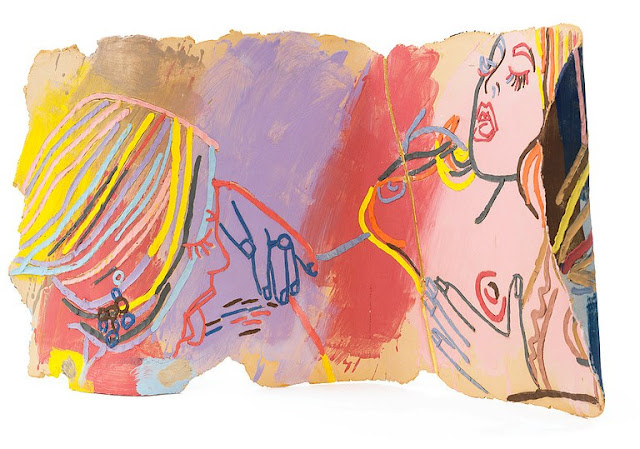 Ghader Amer is known for her provocative mergers of paint and thread and image and text - but Kewenig concentrated on her recent ceramics, which use both sides of bent or folded self-standing shapes to great effect. 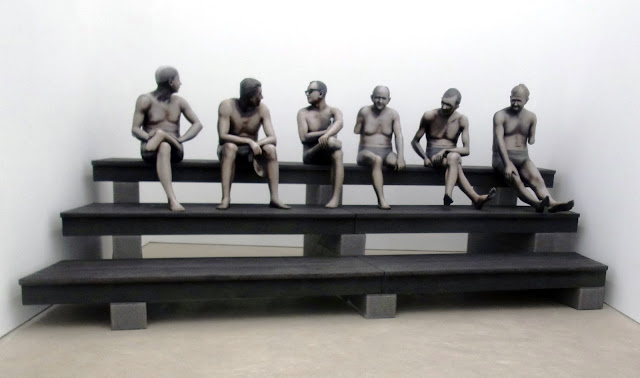 Martin Honert at Johnen Galley: three typically hallucinatory reconstructions of past experience through the sculptural imitation of photographic effect: his school dorm, the view from a child's hide-out and a black and white photo of a sports club for the wounded. 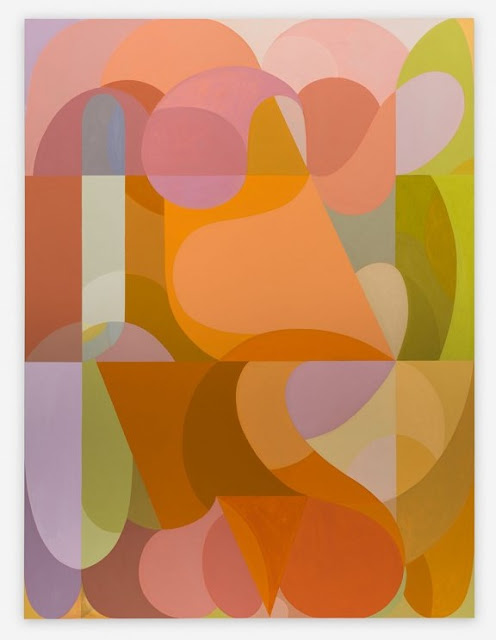 Sebastian Black at Croy Nielsen: extreme abstractions of a puppy’s face are the basis for titles (almost as long as Christopher Williams’ famously thorough ones, as at Capitain Petzel), which wittily describe and theorise on what we might see and initiate shaggy dog tales.This is 'I seen a flower once with all the petals blowed off by the wind except for two (muzzle, eyes). There was a big cruel horsefly on each weighing them down (pupils). In the middle of the flower was an old bumble bee (nose, mouth) doing his thing in the pollen (whiskers). When he was finished with his rounds he went back to his hive (head) and did a jig for the queen. I don’t know what the flies did though. There’s so much I don’t know! My excuse is I had to run home to take some sheets off the line (ears) before the rain came', 2015. 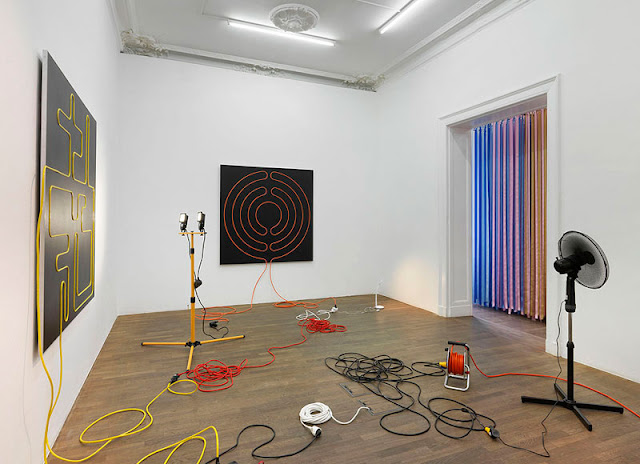 Jacob Dahlgren at Feldbusch Wiesner: the Swede’s off-programme 'How Lines Move Beyond Geometry Into Space' was a riot, including the chance to walk through multi-coloured silk, buy abstract paintings which plug into your domestic appliances and chuckle at the reductio ad absurdum of fair-friendly art in tasteful abstracts made from the spines of Frieze magazines. 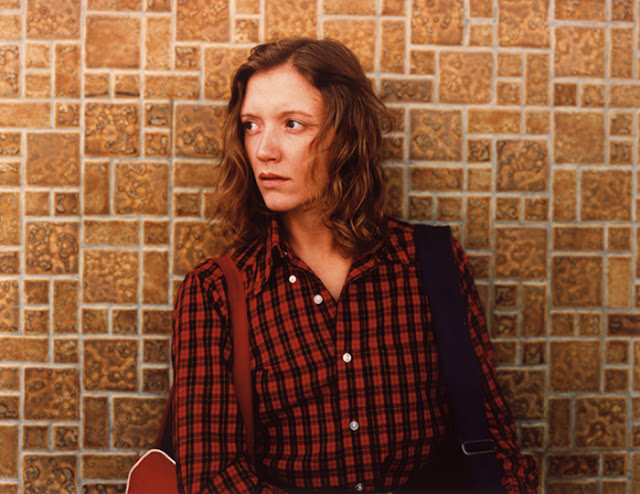 Stephen Shore at C/O: Exemplary retrospective with particularly clear explanations to show how Shore derails the usual photographic conventions, even those he helped to create. Here's his wife, Ginger, in Tampa in 1977.