Or should that be 'Mondriaan'? He changed the spelling, dropping an 'a', when he moved to Paris in 1911...   In the 100th anniversary year since the founding of De Stijl, I visited Amersfoort, Eindhoven, Amsterdam and The Hague – where the Gemeentemuseum, which holds 300 of Mondrian’s works, was showing them all. Mondrian (1972-1944) was everywhere. Or was he? You need to keep your wits about you to distinguish the real thing from various related items. Can you sort the Mondrian from the Not-Mondrian in the following? Answers at the end... 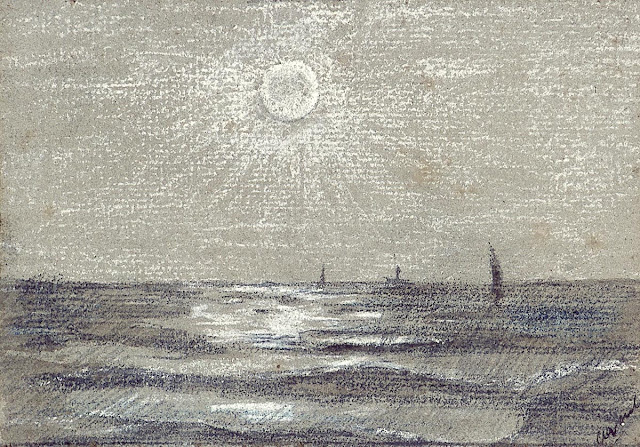 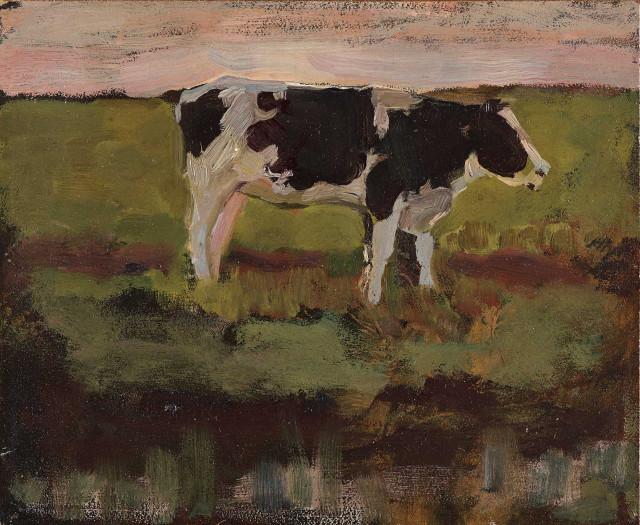 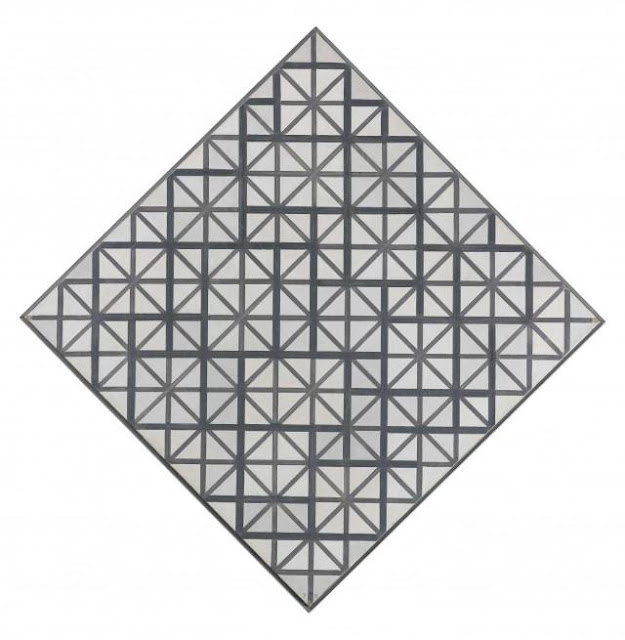 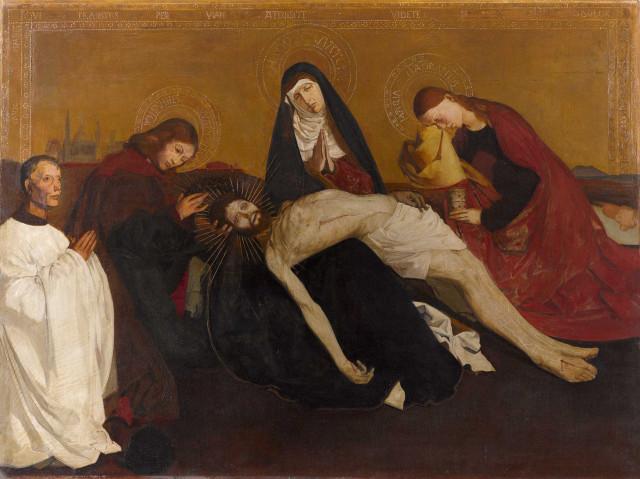 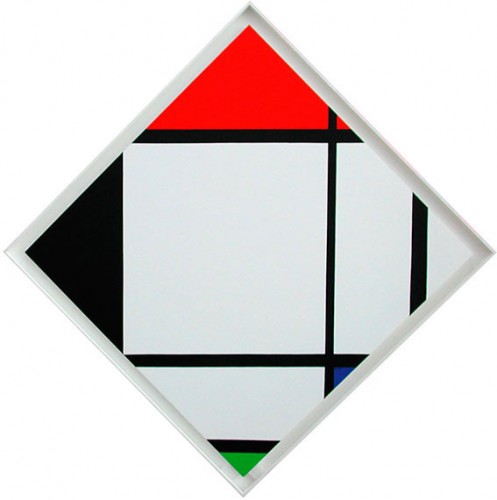 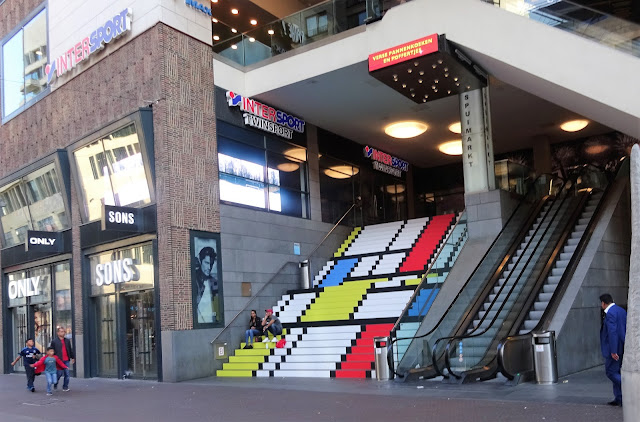 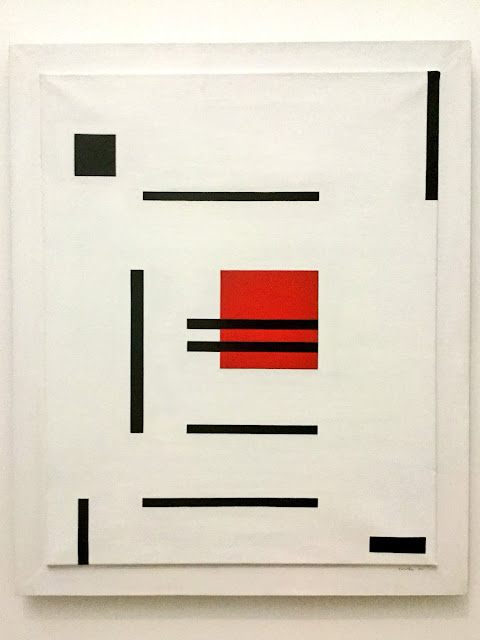 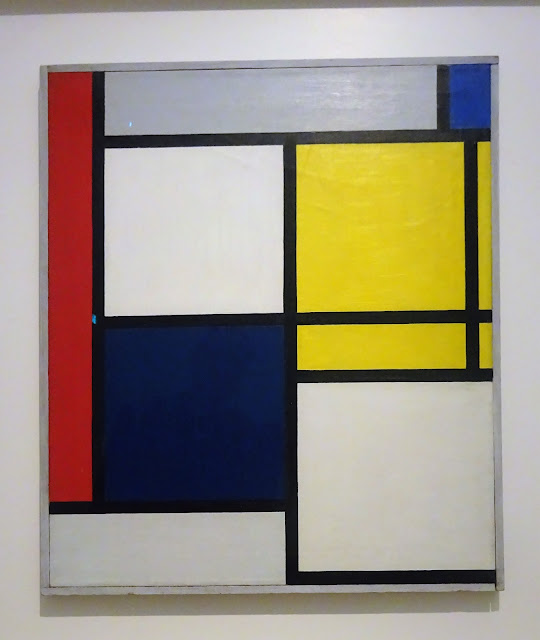 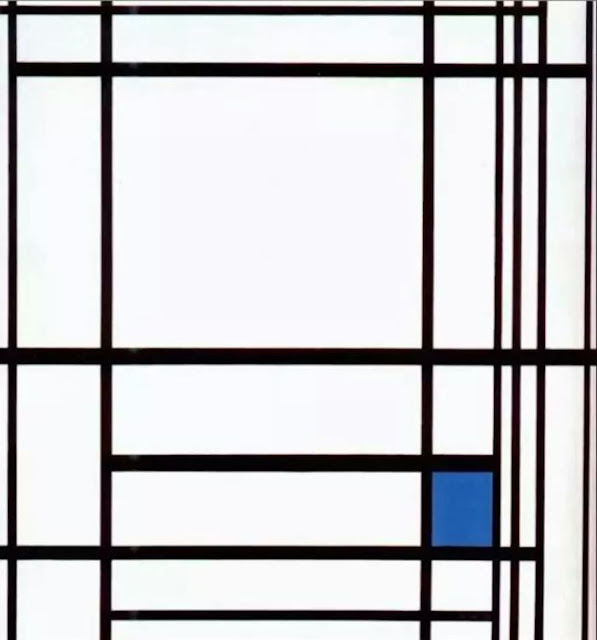 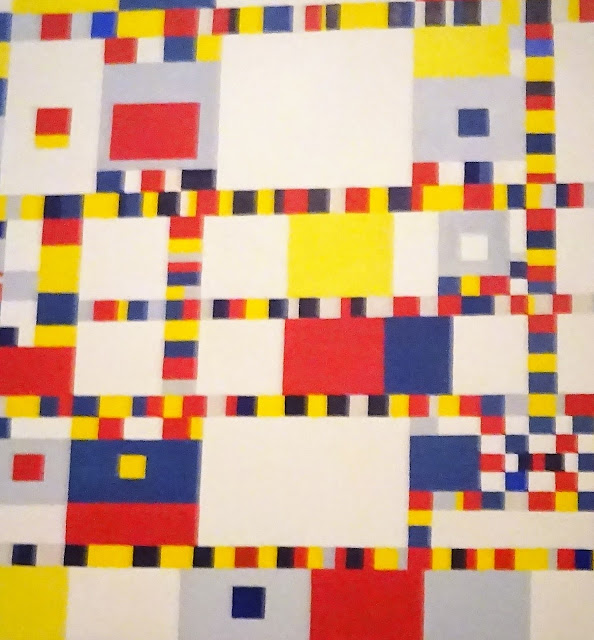 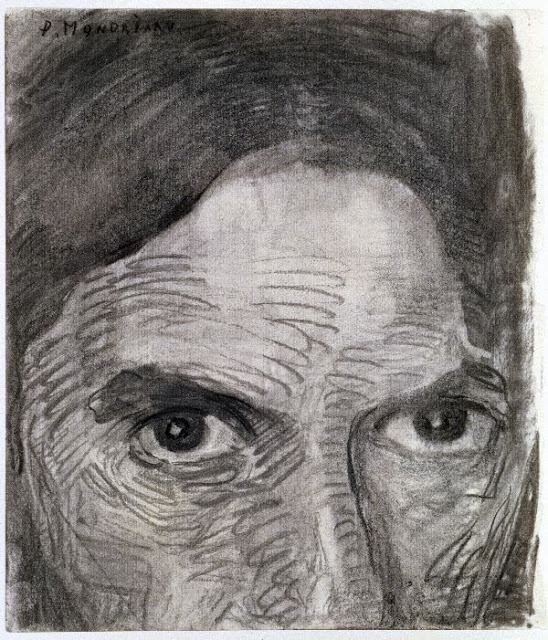 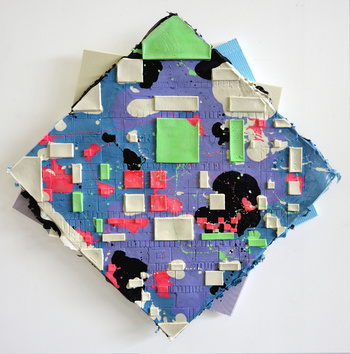 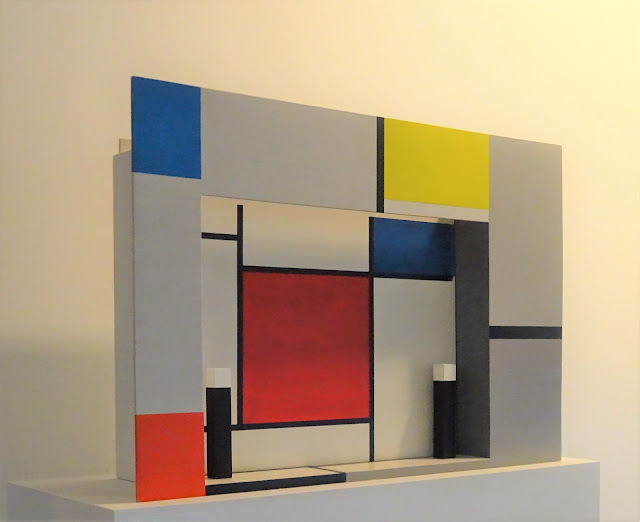 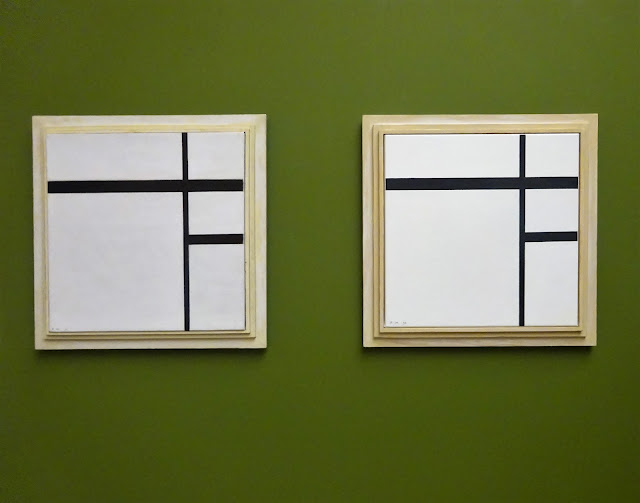 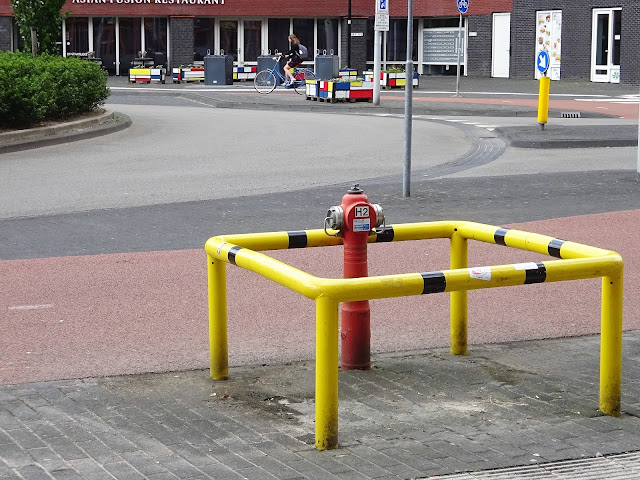 This could plausibly be an atmospheric early Mondrian landscape drawing, but no - I’m starting off with a Van Doesburg, given that he probably receives less of the attention than he should as a significant painter who founded the magazine De Stijl in 1917.

Mondrian’s various early styles are pretty well-known: academic beginnings, murky landscapes, fauve-tinged windmills, symbolist women, cubist experiments, trees edging into abstraction. All the same, you might not have guessed this was his cow, a subject for which Van Doesburg is more famous…

There may be some exaggeration in the tale that Mondrian and Van Doesburg fell out over the latter’s use of diagonal lines, but it’s true that the theosophical underpinnings of Mondrian’s mature style stressed the horizontal and vertical. So this transitional work from 1918 carries is unusual in carrying a whiff of Van Doesburg.

4.  Mondrian: Copy after the Pietà de Villeneuve-Lès-Avignon by Enguerrand Quarton, 1912

An early work? Not especially, for Mondrian took commissions to copy medieval works throughout his career as a way of making money. He loved jazz, dancing and women – whom he was keen to impress. That required a higher income than the sale of his original work could yield.

Having infected Robert Indiana’s iconic hippie version of ‘Love’ by making a visual match which said ‘AIDS’, Toronto collective General Idea went on to ‘infect’ Mondrian with green, the colour he was famous for not using in his mature works.

Mondrian also painted copious watercolours of flowers: some 150 are known. He made these, too, mainly because they were saleable, but they have an emotional intensity which goes beyond dutiful execution.  Piet, incidentally, never could strike up a permanent relationship, feeling each time a woman got close that she became a distraction. ‘I can’t work like this’, he complained in one letter before dumping one girlfriend, Willy Wentholt, in 1923.

7. Not-Mondrian: Streetscape in The Hague


The Hague is, in celebration,  a little too full of red, blue and yellow merchandise, signage, shop fronts, museum attendants' ties and architectural features - most prominently the Town Hall. My assumption is that these cinema steps, for example, were not designed by Mondrian himself.


8. Marlow Moss: White, black and red, 1953
Marlow Moss was unusual among other ‘neo-plastic’ painters: British, a woman, and very much a two-way influence as it was she who ‘invented’ the double line in 1931, which Mondrian adopted the following year.

Mondrian introduced the double or 'tram-line' in 1932,  looking to increase the sense of  optical movement. I think this is the first painting in which a treble line appears.

The Gemeentemuseum has Mondrian’s last, unfinished, work ‘Victory Boogie Woogie’ (1942-44), as it was left in his studio at a stage when taped plans had not yet been fully replaced by paint. The Stedelijk showed that in 1946, but could not obtain it. The Director asked the museum’s restorer, Willy Kock, to make a version of how it would have looked once finished as apparently intended. Willy Kock, yes - some people would laugh at that name… So anyway, the close-up is from the copy, now on display in Amsterdam. Here's the full original from The Hague: 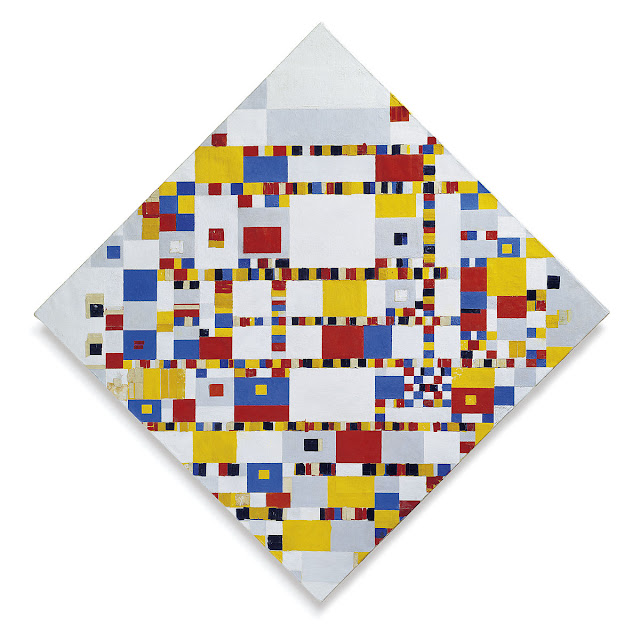 In this  brooding  charcoal and crayon drawing Mondrian, already in his forties, casts himself in a surprising romantic light.

This pseudo-Mondrian appears in Folkert de Jong’s manic installation at The Hague’s GEM, in which he provides his own update on the De Stijl manifesto, deploys Styrofoam caricatures of the principal figures, and lobs in a car and 60 kilos of Wilhelmina peppermints.Van Doesburg (see below) appears as a bandit carrying one of several foam versions of Victory Boogie Woogie which play the Second World War origins of Mondrian’s last painting  (which was intended to celebrate its end) by turning it into a radar image of buildings as used for a night bombing raid. 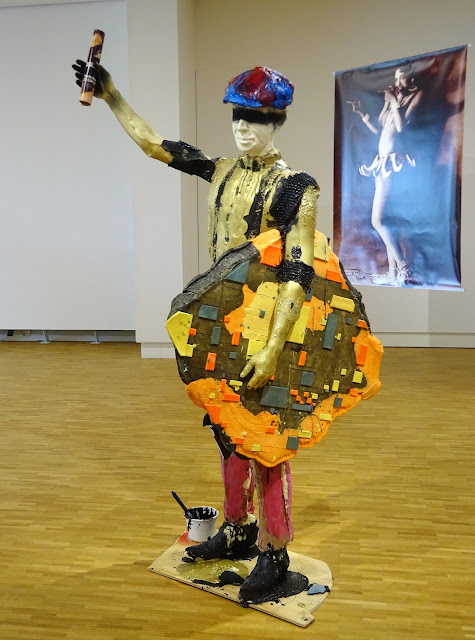 Eindhoven’s Van Abbe museum has one of a number of exhibitions across the Netherlands which survey of de Stijl’s influence on design. That included this reconstruction of a stage design, which one might have thought a likely ‘inspired by’ piece, but was actually made from Mondrian’s 1926 design.

The Van Abbe museum, among its rather odd modes of display, featured recreations of famous shows in art history mixing genuine works with copies made to order. Here they showed one of each, captioned by that old Walter Benjamin puzzler: is the suspiciously clean copy of on the left itself an abstract painting or a representational copy?

Even the utility features started to look suspicious in Piet Mondrianlaan, in Piet's birthplace of Amersfoort. And the flower containers in the background are blatant, though nothing compared with the display of Mondriana at Mondrianhuis.