Three years ago I selected some public sculpture worth looking out for at http://paulsartworld.blogspot.co.uk/2014/08/sculpture-goes-public.html. Much of that was up for substantial but temporary period *, so here's a selection - mixing the obvious with the less obvious, but all on view outside** this summer. It's notable that the number of 'sculpture trails' is growing, and I've included one work each from The Line, Sculpture in the City and the newly-timed Frieze Sculpture Park... 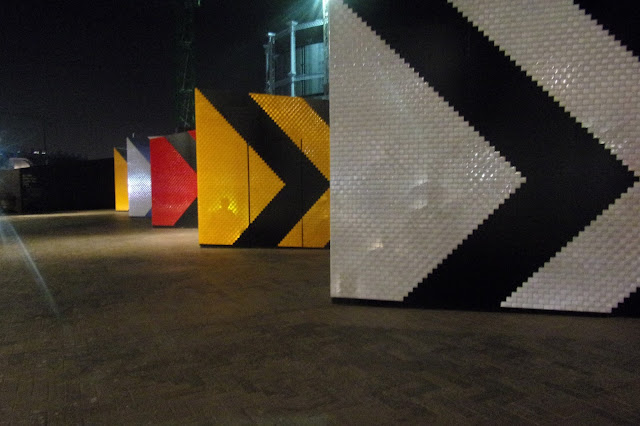 
Walking the 50 metres along Bangladeshi-British artist Rana Begum installation of 30,000 reflectors compresses the experience of urban walking into the same space as the repurposing of functional items, an op-architectural take on minimalism and a spiritually infected nod to the potential infinity of repetition. And it remains good by night. 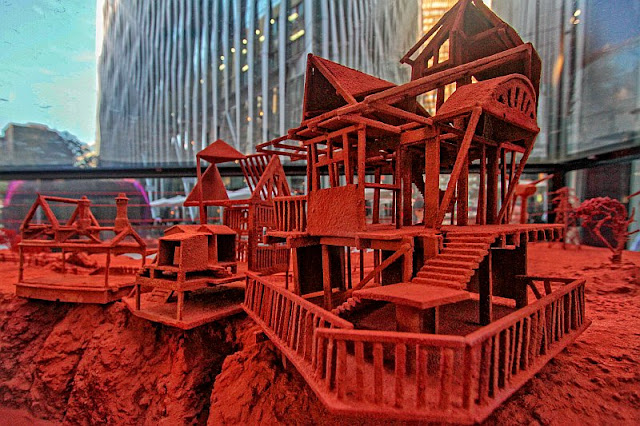 Six steel vitrines at the Nova development contain  celotex 'mindscapes' coated with brick dust. Saad Qureshi made his first public commission from the memories provided to him by people passing through Victoria of a landscape - meaningful to them -  to which they no longer had access. The result, appropriate to its travel hub location, is a transnational tribute to the baggage-limit-proof transportation of memories. 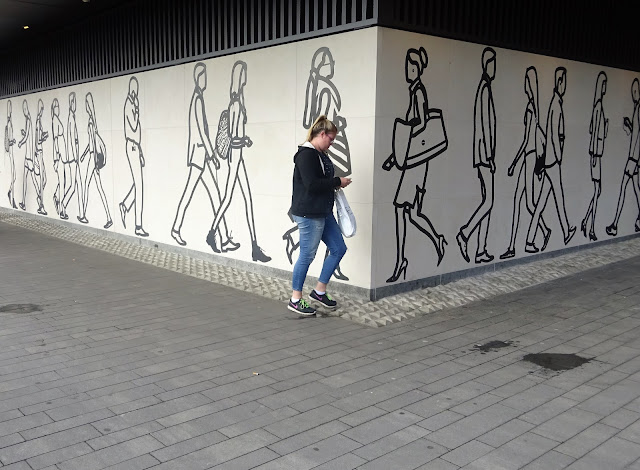 This frieze of  Julian Opie's distincively stylised  walkers is on the outside of a newly built Citizen M, a high tech hipsterish Dutch hotel which I pass most days on the way to work. It's well placed to relate to real life pedestrians, though Citizen J's figures aren't doing what many of those passing are: looking at a mobile phone's text messages... 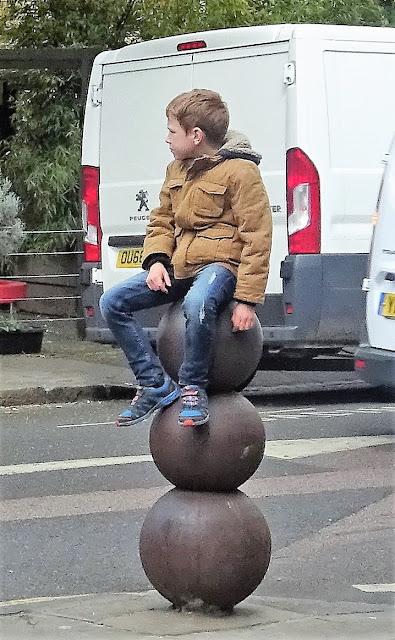 Antony Gormley's iron bollards, sited near his studio, based on the forms of a simple oval, snowman, peg and penis, are now rusting nicely. Not only are they refreshingly separate from his own body's  form, they also facilitate less orthodox forms of public interaction. 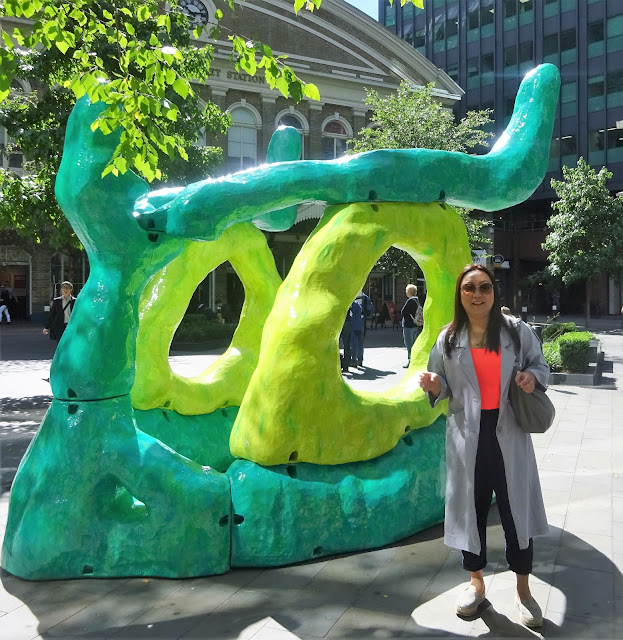 Karen Tang: Synapsid (2014) in Sculpture in the City, near Liverpool StreetThat's Karen Tang herself, looking unperturbed by what the title (a dinosaur grouping) and colour (radioactive reptilian) suggest could be a sci-fi menace. Perhaps, after all, it's just a bulbously colourful enjambment of abstract shapes, ideal for workers in the city to sit in when eating their sandwiches. 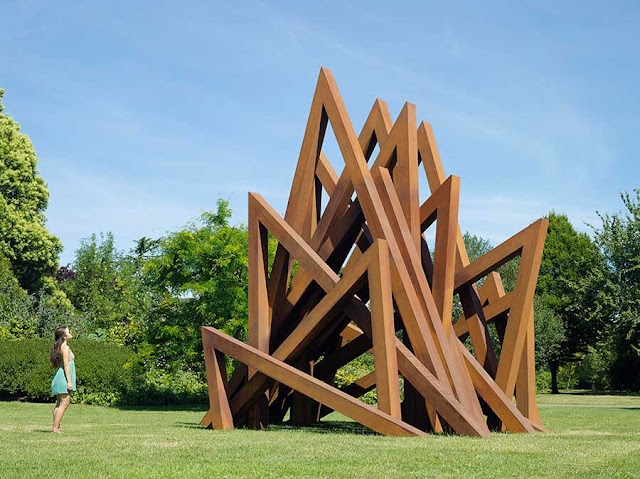 As a recent show at Blain | Southern demonstrated, there's more to French artist Bernar Venet than the monumental circular-tending bronzes which are rather ubiquitous on the continent. Still, those are all based on mathematical operations, making them platonic forms of a sort. The same is true of this impressive nest of triangles, part of a recent move towards acute angles of which Venet says 'you have a bunch of arcs in order, and boom - all of a sudden it’s like shoulders and elbows smashed into it'. 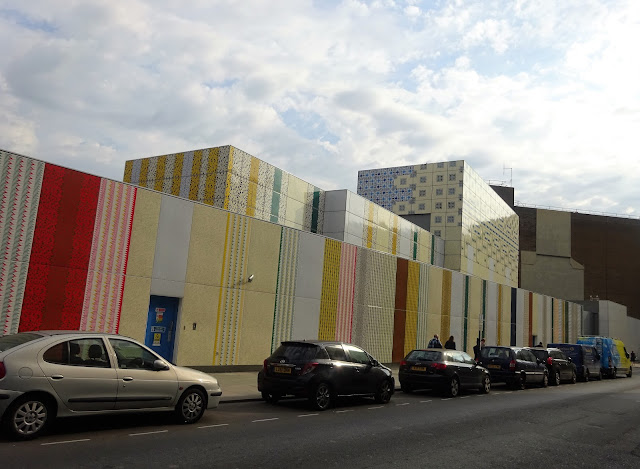 
Art on the underground is a topic of its own, of course, but most of it is, well, under the ground. An exception is Jacqueline Poncelet artist's vitreous enamel dressing of Edgeware Road's non-Bakerloo branch*** in gridded patterns derived from the locality: tiling from roofs, leaves from the park, water patterns from the Tyburn Stream... It must be the tube's biggest installation, even if you took added up the area covered by all 270 of Mark Wallinger's Labyrinth mazes at each station, and makes Poncelet more of a permanent London presence than her husband, Richard Deacon. 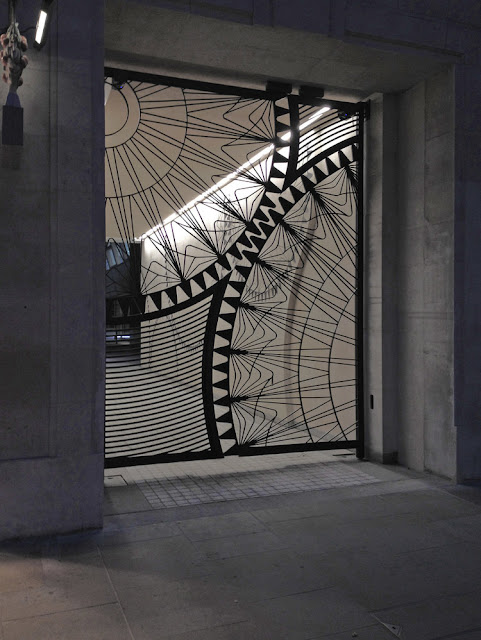 Rona Smith:  An Age, An Instant, 2014 at 10 New Burlington Street off Regent Street


Rona Smith's gate applies Poncelet's approach to the walls and the intricate bronze gates at the mews entrance to New Burlington Street, responding to Regent Street's history as a fulcrum for the manufacture of mechanical timepieces by building in references to the engravings on turn of the century pocket watches, as well as their cogs. An entrance to times past... 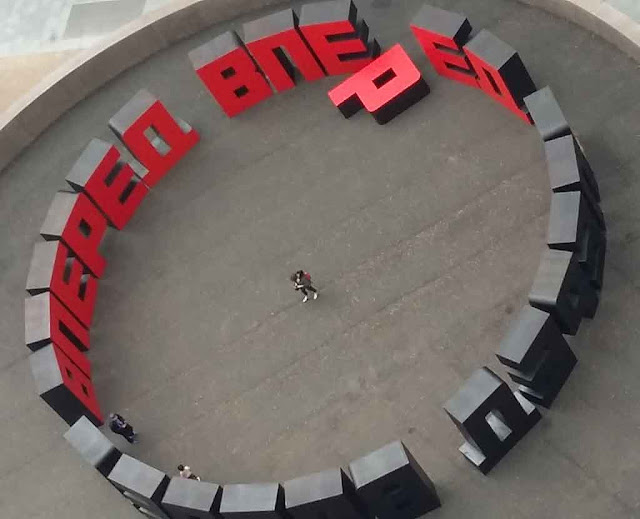 This monumental steel sculpture by Russian artist Erik Bulatov has been placed on the terrace outside Tate Modern to mark the centenary of the 1917 October Revolution. It consists of the word ‘forward’ spelled out four times in Cyrillic letters, each standing ten feet high, arranged in a wide circle. The heavy irony is well-timed: Brexit, here we come! 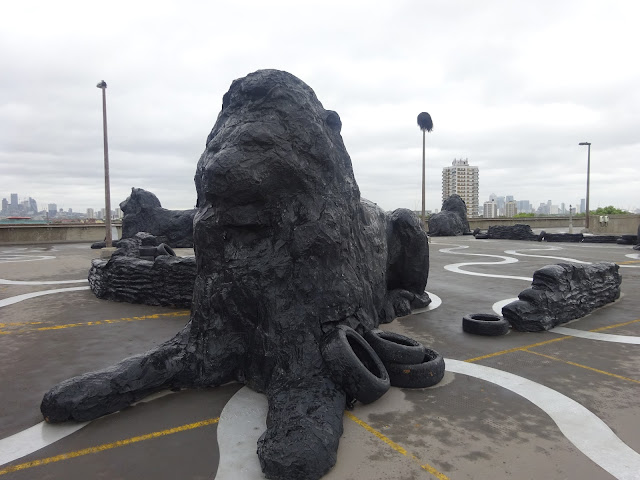 Public art doesn't get much more famous than Trafalgar Square's  four 20 foot long bronze lions by Sir Edwin Landseer (1867). Hang on, though, young Polish artist Ewa Axelrad seems to be taking our patriotism down a peg or two with her version: stuck on a car park roof, titled from Beckett, made of fragile cinefoil, mired in tyres... 'Surely' says Major Brex-Barking, 'this is just why we shouldn't let anyone from Eastern Europe into our empire'. 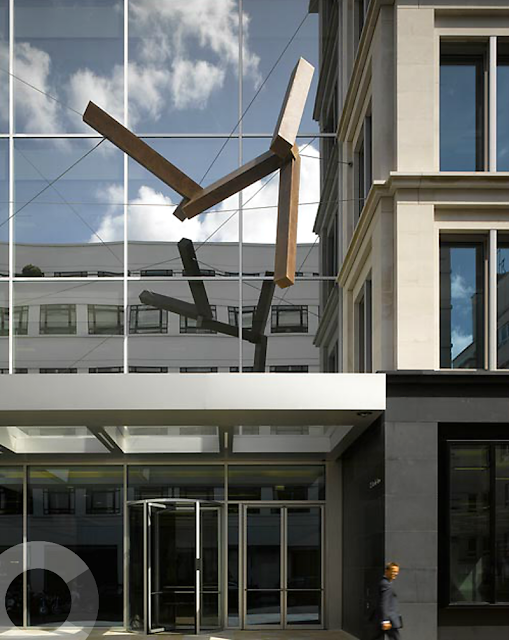 American artist Joel Shapiro arrives at balance-defying anthropomorphic-come-architectonic forms by disassembling more coherent structures. This is two tonnes of bronze but floats 50 feet up in front of No 23, strung on tensioned wires. Verge, incidentally,  caps Hauser & Wirth's two spaces either side, which the mega-gallery might appreciate more were Shapiro not with their rival, Pace. 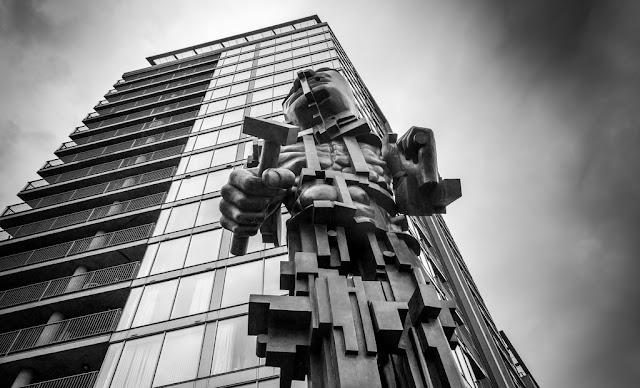 Eduardo Paolozzi: Vulcan, 1999 in The Line at Royal Victoria Dock

The biggest work on The Line is Eduardo Paolozzi's eight metre high bronze Vulcan, in which a half man,   half machine envisioning of the Roman god of fire and metalworking brandishes a blacksmith's hammer. A self-portrait, perhaps, as a cubo-surrealist sculptor. 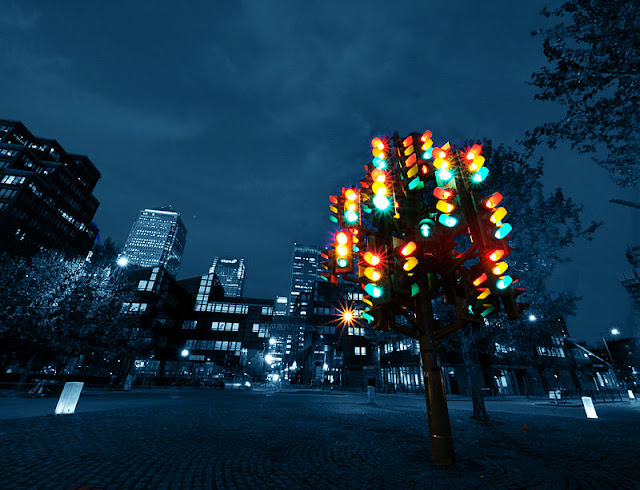 These 75 sets of computer-controlled lights have caused ocassional motorist confusion on two roundabouts, having been moved in 2014. French artist Pierre Vivant combines the shape of a London plane (the lights replaced a dying tree) with the ever-changing - yet, it would seem, ultimately pointless - activity of the markets at nearby Canary Wharf. And the Traffic Light Tree feels like full circle from Rana Begum's reflectors...


*** transport nerd question: why are Portland Road and Regent's Park separate stations when the distance between Bakerloo and non-Bakerloo lines is less than at Edgeware Road, where they are treated as one station?
Posted by Paul Carey-Kent at 00:24