Here, with equality but hardly equity, are ten picks from ‘Frieze week’: one work each from commercial galleries, institutions, auctions, and the seven London Fairs over in which galleries aspire to show interesting fine art -  Frieze, Frieze Masters, 1:54, Peckham International, Sluice, Sunday and PAD. Moniker (street art) and The Other Art Fair (not gallery presentations) fall outside my remit, which is fortunate, as I didn’t visit them. 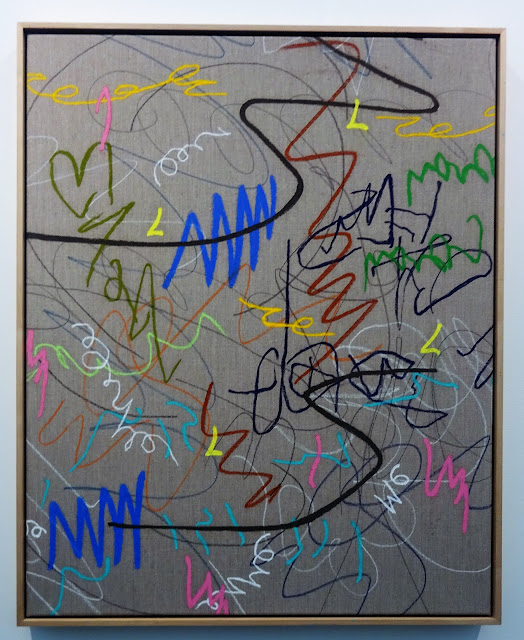 I always look out for Navid Nuur, and this year he showed this attractive abstraction with his Berlin gallery, Max Hezler. While the title evokes the world of radio, it turns out to be an anthology of marks which the inventive Dutch artist has gathered from jotting pads on which potential purchasers have tried out pens in shops. Nuur has blown them up into a painted version which, might be seen as an attempt to avoid the artist making any marks or choices but remains rather characteristically his. 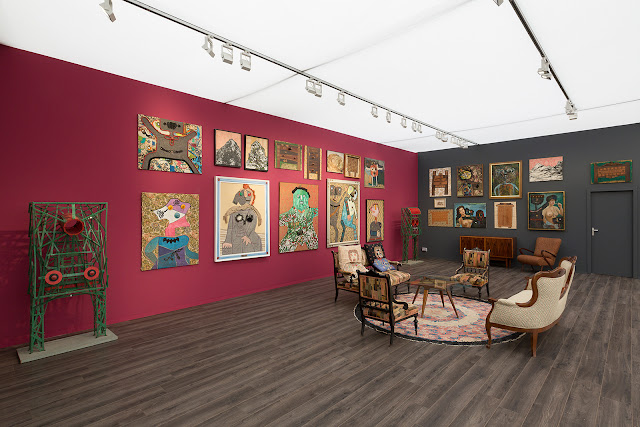 
Frieze Masters shows work made prior to 2000 by artists who had established a reputation by 1980. Waddington's recreation of Peter Blake's studio gained the most publicity: so expected were its contents that, in Baudrillardian fashion, I suspected it was more like Blake's studio than Blake's studio itself. Yet I preferred the reconstruction  by Luxembourg & Dayan in collaboration with Gió Marconi of Enrico Baj's Lombardy villa. It was hung with a feast of eccentric paintings and collages by the Italian artist (1924-2003), plus two Meccano sculptures and original furniture with Baj-designed cushions. 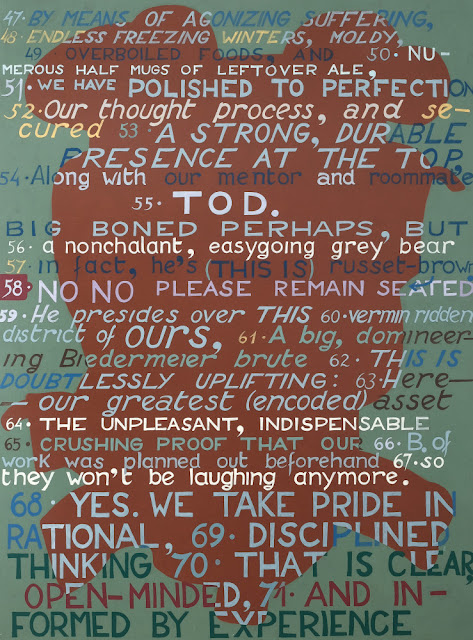 Eduardo Batarda: III (Polished To Perfection), 2016 in 'Later is Now' at Workplace Gallery

Despite recent closures, there are still some 200 worthwhile commercial galleries specialising in recent art. The London branch of Gateshead-originated Workplace has an excellent group show curated by Portuguese artist Hugo Canoilas. It includes his compatriot Eduardo Batarda - born in 1943, and a significant figure in Portugal but little-known internationally - uses such online sources as lame jokes, popular psychology, dictionaries and  sociology as the basis for chance-driven world collages. His multi-painting sequences 'refuse to  meddle with global problems' yet generate a mystery comparable to the poetry of the late John Ashbery: the surface structure of meaning doesn't quite coalesce, but indirect meanings occur around the side... 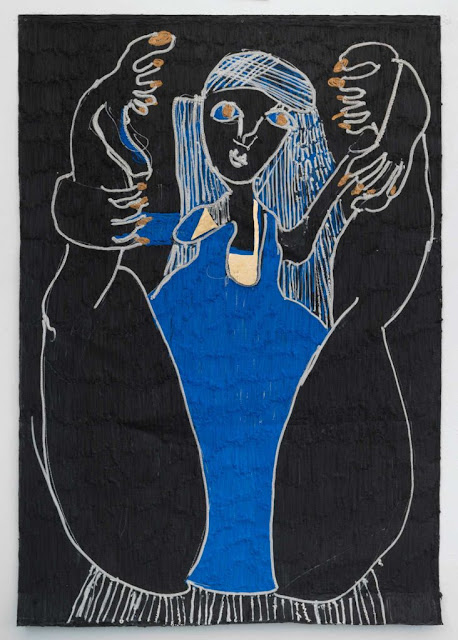 A ripple effect saw British participants last year moving up from the Sunday Fair for upcoming galleries to Frieze in place of London galleries who have stopped trading, That gave Sunday a predominantly foreign flavour. LA's Shulamit Nazarian brought Brooklyn-based Summer Wheat (yes, her parents were hippies), who makes what look like tapestries but are actually acrylics on aluminium mesh. There's some gusto in how she combines the historically clichéd male and female expressive traditions to the conceptually related end of subverting the male gaze - in riffs on painterly traditions, through figures in landscape, and through a set featuring yoga poses. 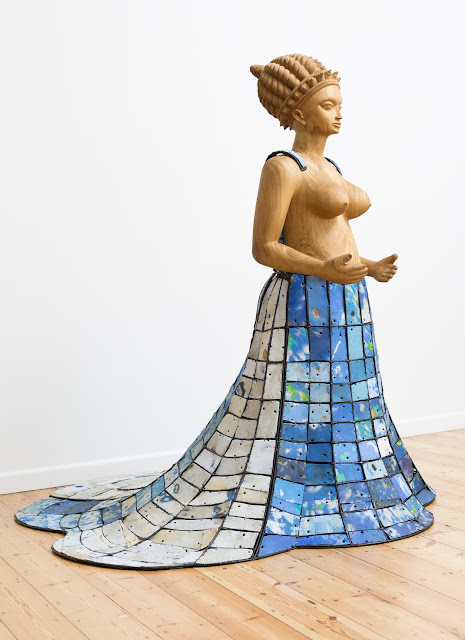 The African 1:54 was probably the best of the subsidiary fairs. Romuald Hazoumé, one of the most widely known African artists, was shown  by the October Gallery, the most established of London's African contemporary specialists. His found object masks, each centred on a jerry can, are now priced around £15,000. But the most striking presence on the stand  was of this German 'mummy', representing the welcome given to refugees through a merger of the statue of liberty with an African goddess of welcome - resplendent in a dress made from the soles of flip-flops which Hazoumé collected from beaches on which they were discarded by refugees. Thomas Ruff The Emperor 06, 1982 at the Whitechapel Gallery

The Whitechapel's Thomas Ruff's retrospective covers all the obvious series - interiors, buildings, portraits, night shots, nudes, stars, j-pegs, abstracts, negatives etc - plus an entertaining early set of the photographer himself indulging in a touch of Bruce McLean-style posing with his furniture, which I had never seen before... 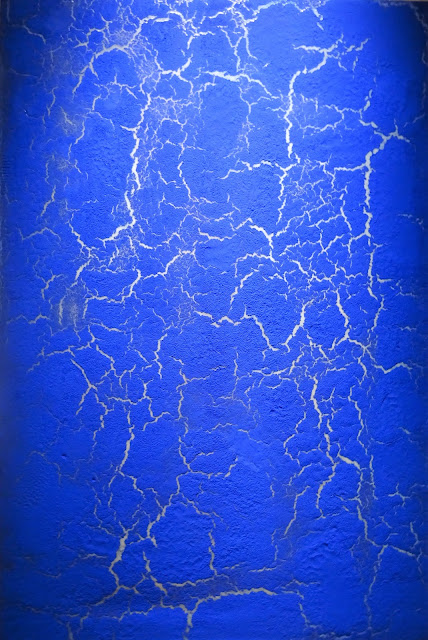 Philippe Pastor: Blue Monochrome, 2016 at the Pavilion of Art and Design (PAD)

PAD seemed, by my unscientific assessment, to have shifted towards design rather than art this year. But I did discover the Monegasque abstractionist Philippe Pastor (born 1961), who was well paired with the ubiquitous Lucio Fontana at Geneva / Monaco gallery De Jonckheere. He applies pure pigment to glue, then exposes it to UV light for two days. The resulting chemical reaction causes a pattern of fractures to develop: attractive, ad not without metaphorical potential as the world cracks up. 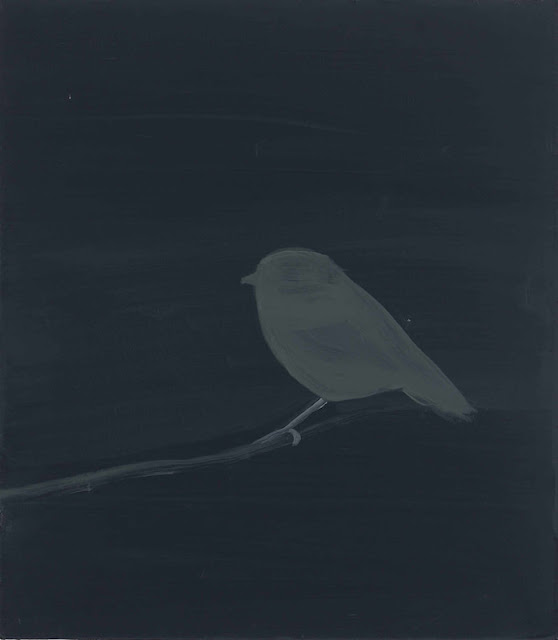 
Peckham is the new kid on the block, the block in question being the Bussey Building. There’s a South London bias to participation, and MOCA London (the PIAF-style tongue in cheek name standing for  Museum of Contemporary Art)  brought an interesting selection of works some 250 yards. It included Miho Sato’s blue tit, typical of the London-based Japanese painter's ability to filter out detail to leave an evocative essences from the contemporary deluge of images - and, here, the question: is it night, or is that just the edit? 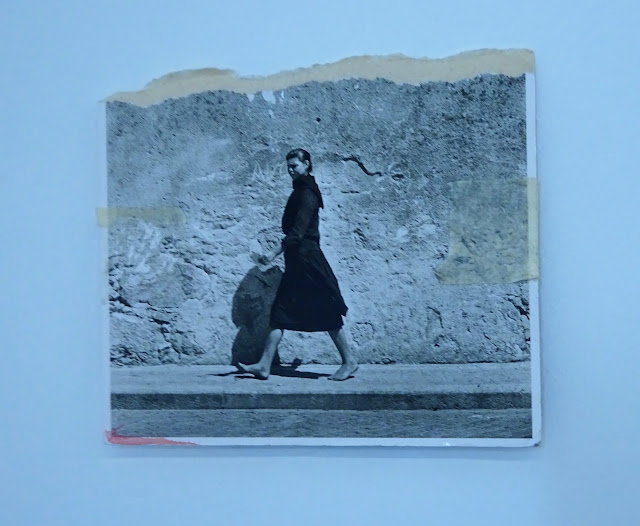 'This is a postcard by Agnes Varda... The top half had a picture of Sophia Loren, I ripped that off and kept the woman. She's walking on the pavement holding a note, she looks like she's going to deliver it to someone, someone who's waiting for her... or someone who doesn't know they are waiting for her... You can't see her face but I feel like she knows where she is going and she's ready.'

The outstanding booth in this spacious Hackney  festival of artist-run spaces was Dolph’s presentation of Athene Greig, reinventing the stand as a Gesamtkunstwerk which included bits from her studio, such as a comb she paints with, and items of personal significance. Visitors donned headphones for her beguiling ten minute audio-guide-come-autobiography (extract above), complete with a collage of music. Expect to see a big gallery do this next year! 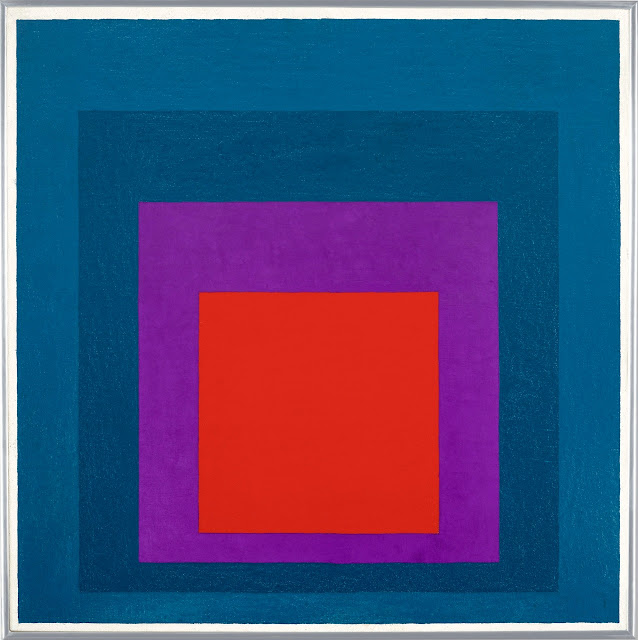 Estimated at £0.7-1.0m, this  example of Albers' homages to the square made £2.2m, perhaps reflecting that its unusually - indeed, intemperately - luminous in the colour combination which Sotheby's auctionese describes as 'a lusty red nestled in soft violet, a muted navy encased by an exuberant blue'. The series of some 2,000 paintings, which occupied Albers pretty much exclusively from 1950-76, is a means of serving up colour, which he always started from the middle - so that (lusty?) red went on first.