TRAUMA AND CONSOLATION AT ART ROTTERDAM 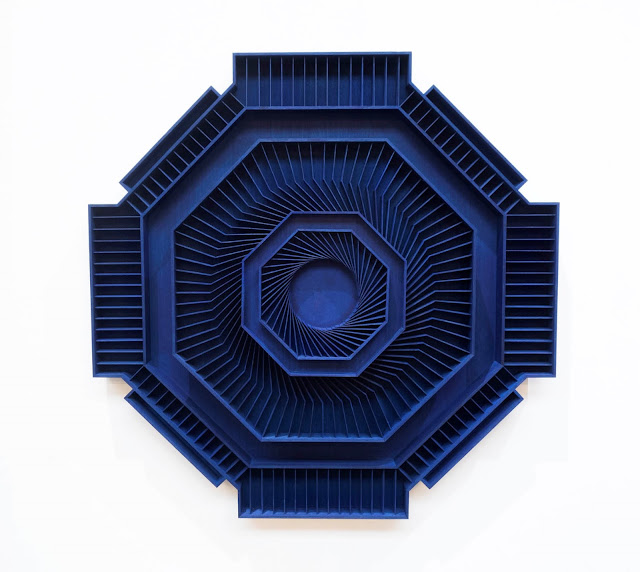 
Art Rotterdam is well presented in the iconic modernist former factory Van Nelle Fabriek and the quality is high. The typical work is relatively restrained: plenty of historically aware abstraction and informative conceptual gambits. Leading Dutch galleries such as Galerie Ron Mandos (above is from an all-blue stand), Martin van Zomeren, Fons Welters and Stigter Van Doesburg had exemplary stands along those lines. The British had a strong presence, with Time Ellis (FOLD) and Tom Dale (Copperfield) having excellent solo shows. I found myself drawn towards work which was as dark as the times of refugees, Trump, Brexit,global warming and North Korean posturing might seem to require, yet at the same time looking for work which took us away from all that with a smile or at least some philosophical acceptance... There's room for ambiguity, but let’s start with stern aspects before moving on to more consolatory works. 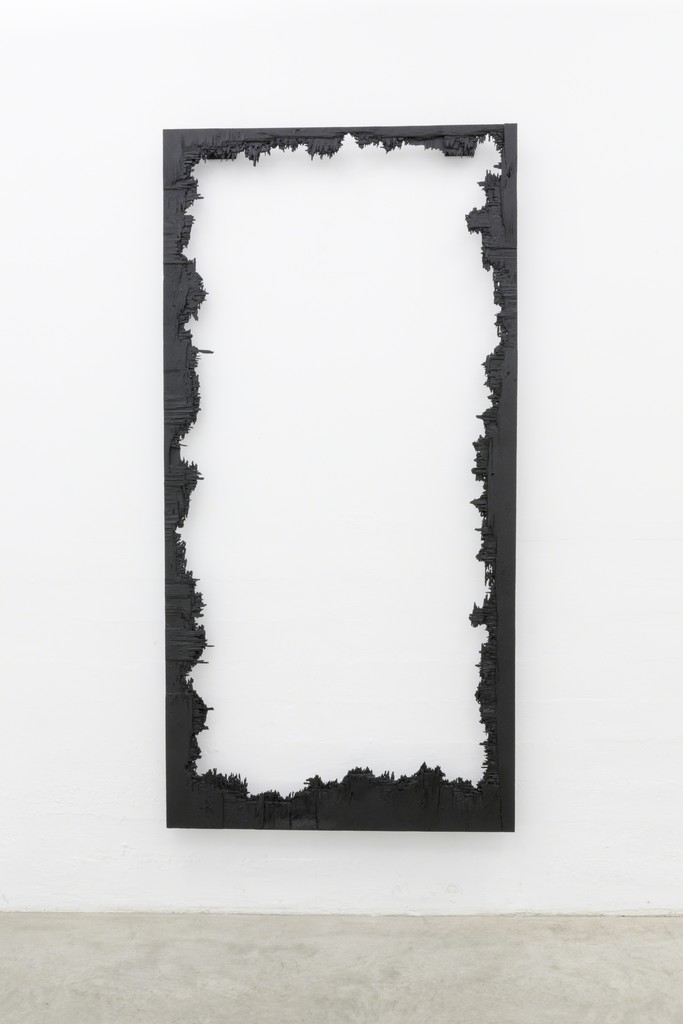 
What would be a black monochrome painting seems to have been kicked in. Not quite so: American artist Matthew Day Jackson blasted it away with multiple rounds from a shotgun. The first time, he says, he had used a gun, leaving him with a very sore shoulder and a remnant which speaks to the need for more gun control in the US. In line with that monumental purpose, it’s a one-off bronze we see, the result of direct hot casting of the original shot-through door. 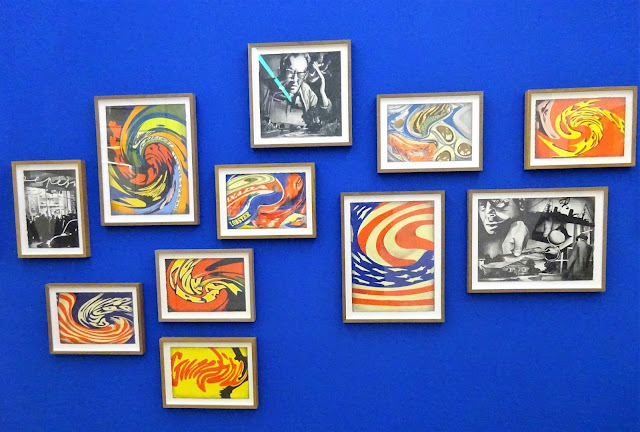 Dutch artist Marcel van Eeden hasn’t altered his sources: all from the world prior to his birth in 1965, so building in his own historical insignificance in a paradoxically significant manner. But where he used to convert those to predominantly monochrome drawings which coalesced into narratives, here colour – often period hues from the 1960’s which have subsequently faded – came to the fore, and the unsequenced images have been drawn from computer-spun versions of the originals, creating a vortex effect suggestive of the rush of time and the hole down into which the past gets sucked. The effect was enhanced by his having coordinated three galleries to choose different bright colours to display them on: pink, blue and green. 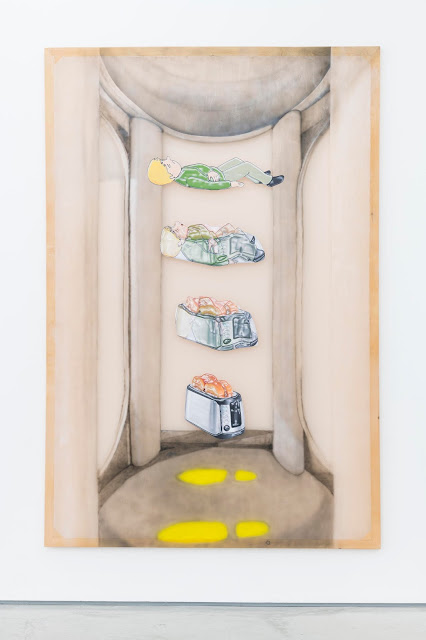 Plenty of people find that their anxiety sharpened by the intrusive visibility of security and its technologies. The Swedish artist Thomas Hämén gives form to just such fears, seeming to show the sequence whereby an airport wave scanner, rather than generating an image of the body as dressed in transparent clothes, has melted a traveller into toast. Consistent with the scanner’s intended function, it is made on semi-transparent nylon stretch fabric, the material which nylon stockings use to resemble human skin and by doing so conceal its imperfections. 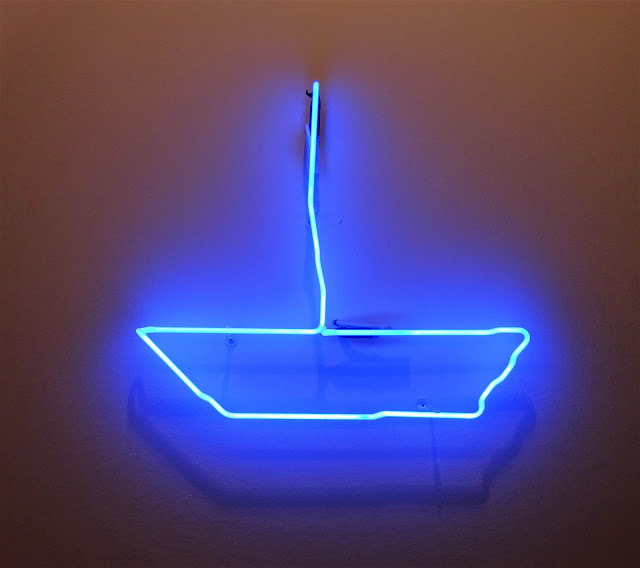 It isn’t hard to imagine that this boat in the colours of an intense sea stands in for a practice tied to the perils of migration and more, and so it proves: Enrique Ramirez deals with the troubled history along the long coast of his native Chile. He has, for example, shown sails made by his father - who has a sail-making workshop in Santiago - inverted, and bearing the traces of their use. In 2013 he travelled on a cargo ship to make a continuous twenty four day shot of the passage from Valparaíso north along the Pacific coast, through the Panama Canal, and then across the Atlantic to Dunkirk. 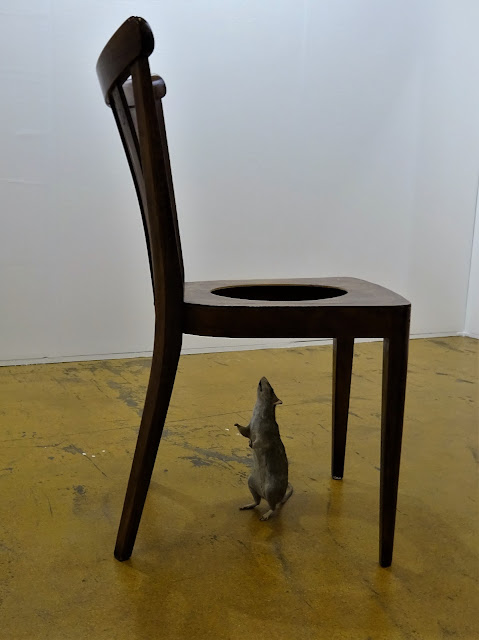 Austrian artist Sofia Goscinski has a complex practice: her ideal viewer is familiar with Franz Fanon's positions on symbolic race reversal and anti-colonialism. That said, no theory is required to be struck by a photograph of a white couple with black masks, and in the male case a black prosthetic penis; or the presence of a rat beneath a chair with a large hole in the seat, representing the possibility that the underclass will leap up and administer a nasty nip to the unprosthetic pallus of any member of the ruling class at rest. I did not sit down. 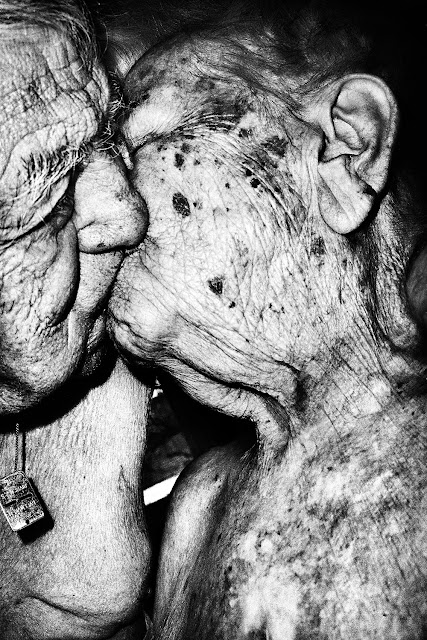 The Danish photographer Jacob Aue Sobol has said ‘I photograph people because something about them is beautiful and I want to share a moment with them’ and, though this image is bound to foreground our mortality, that applies most strikingly here. Sobel has roamed the world to put together portfolios famous for capturing communities facing harsh conditions in stark yet intimate black and white tonal range. This image of 89 year old Axel kissing his 99 year old girlfriend Onse, though, was taken in Copenhagen in 2010. 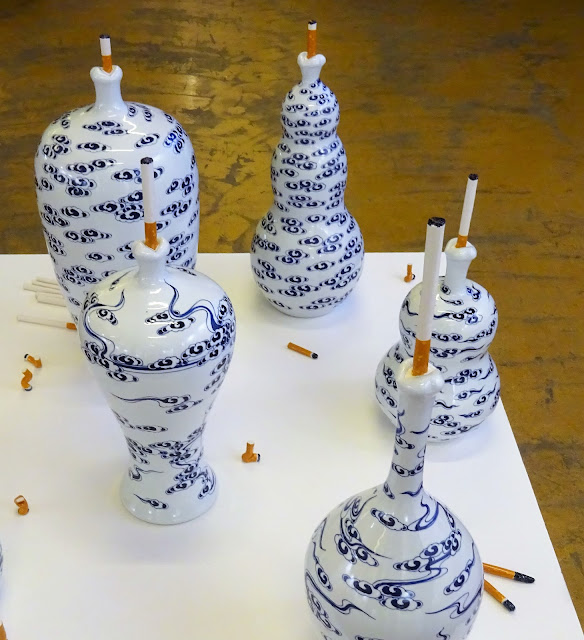 Or should that 'lighten up' be 'light up'? The imaginative ceramics of French artist Jessica Lajard included several vases which she made of glazed Jingdezhen porcelain and clay in China, where she studied with master craftsmen who were forever offering her a smoke. Those trails of smoke may not be traditional blue and white decorations – yet they do retain a hint of fiery dragons. The vases’ necks turns to lips, and the only flowers present are cigarettes. I guess I could put this in the dark section, with the floral Vanitas of the still life tradition replaced by the deathly implications of smoking. Go further, and the vases are lungs. But they still made me laugh… 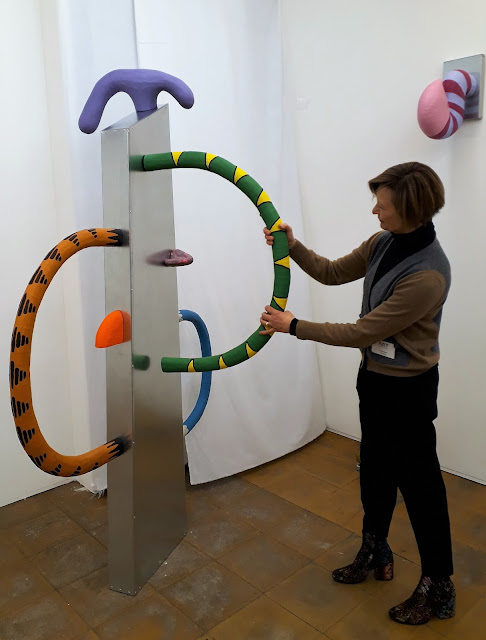 
Karen Tang uses the clean colours and shapes of geometric and biomorphic sculpture. Yet just as we wonder how critically nuanced the relationships of form and hue might be, her gallerist Joanna Gemes is liable – as shown – to pluck off a piece. For these are fibreglass elements with magnets, which can be moved around or even between their galvanised steel supports, or as it turned out at Art Rotterdam, attached to the desk and part of the booth’s wall which had metal behind it. The result is by turns futuristic, democratic and subversive – but most obviously fun.

Moscow conceptualist Nikita Alexeev, a founder member in 1976 of the group ‘Collective Actions’, says he was in a state of bliss on a Greek beach – swimming, sunbathing, collecting sticks that the sea had tossed onto the shore – when he got to wondering what conversations the sticks would have among themselves, and placed them into groups of three. He imagined the somewhat philosophical triad ‘Why?’, ‘Because’. ‘So what, then?’ and set to work drawing the groups just so. It’s a template you can apply to any matter which may be troubling you. 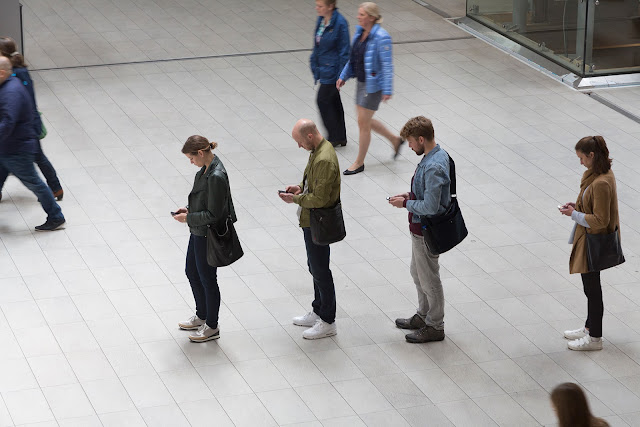 Sander Breure and Witte Van Hulzen: How can we know the dancer from the dance?  Video registration from performance, 2016

Over six months, Dutch artist duo Sander Breure and Witte Van Hulzen choreographed a rotating cast of four actors to mimic twenty minutes of movements typical of commuters awaiting a train at Utrecht’s central station, but to do in unison. That alerted the genuine travellers, whose uploaded phone films of synchronised text checking and the like were edited by the artists to form the work: Breure and Van Hulzen took no footage. The public, it transpired, had not only provided the basis for the work, they had recorded it, too. Moreover actions which were utterly mundane became amusing and curiously uplifting in their new form. 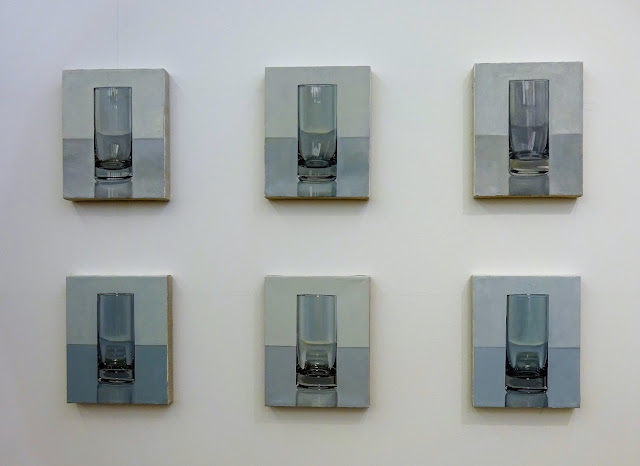 Every day is a good day to see Peter Dreher’s Day by Day, Good Day paintings of an empty water glass, which he rendered - by day and by night, spot the difference - some 5,000 times from 1972-2015. He demonstrates an ability to accept the flux of the world with equanimity by losing himself in the act of painting, consistent with the Zen maxim of his title - applies here to a block of twenty examples, all 25 x 20 cm. 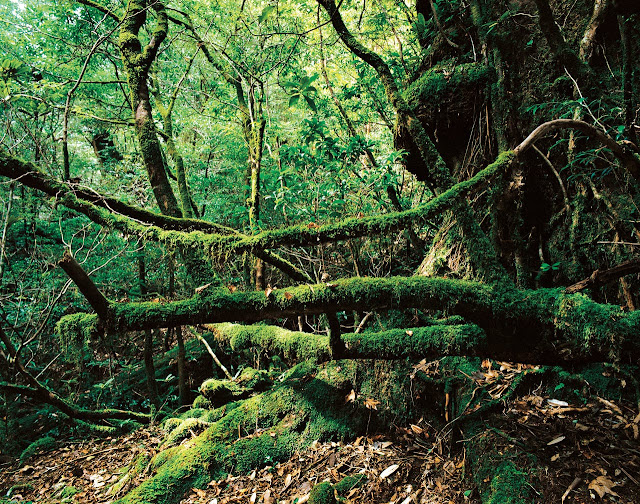 Jacqueline Hassink: Onoaida 3, on the Japanese island of Yakushima (2016) from the project 'Unwired'

Among the subsidiary events were a retrospective of Paul Delvaux, showing that his famous work is a small proportion of a rarely-seen - if unconvincing - wider picture; 'Kunsthalle for Music' turned Witte de With into an innovative concert venue with deconstructions of musical traditional popping up unpredictably across two floors; Jacqueline Hassink hunted down and photographed places with no digital footprint (Nederlands Fotomuseum); Walter van Beirendonck installed a riot of masks - from ethnography, art and his home field of fashion - at the World Museum; British artist Anne Hardy installed Rotterdam atmospheres to great effect in the Museum Boijamans Van Beuningen, which led with a show dedicated especially to the works from the collections which are too big to get shown very often (some were great, others you could see why they were let out rarely); and Gary Hill understandably needed plenty of whiskey to get through a 24 hour marathon of interviews with art critics.