WHERE TO LOOK IN MARCH 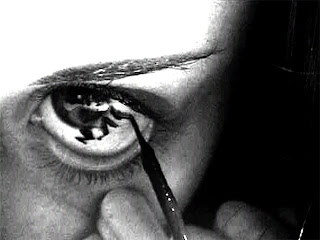 Of course lots of the artists on view in London's galleries are themselves from London, but it shows how London acts as a world centre for art that I can feature so many artists based elsewhere: Germany (Shiota, Werner, Ackermann, Goldbach), France (Zarka, Broisat, Boursier-Mougenot, Frize), USA (Burns), Switzerland (Orlow, Porritt) and Newcastle - Graham Dolphin's base is after all further from London than is Paris. Quite a few of the gallerists come from elsewhere, too, and the edgy watch-your-eyeliner video still above is from a short film by Vienna-based Esther Stocker which features in Rokeby's 'Zero Budget Biennial'. 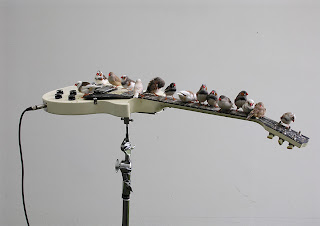 from here to ear

Boursier-Mougenot is a French musician and artist who explores unexpected means of making sound: his best-known previous works are a paddling pool with floating crockery which chimes as it collides, and a fleet of hoovers attached to harmonicas. The Curve features close up film of guitar players but to the ‘sound of the images’, ie derived from the video signal, leading into the main event: a flock of 40 zebra finches, kept in place by light levels alone, create a soundscape as they hop on and off guitars. Their movements are largely in response to the 25 visitors allowed to wander among them at any one time, and the resulting chirpy-chirpy thrum-thrum works remarkably well - much more consistently than you might expect. Aurally it ends up somewhere in the middle of John Cage’s use of chance, Messian’s bird song transcriptions and an outcrop from Sonic Youth’s unorthodox tunings. The whole ensemble may well be the most memorable in a London gallery now. 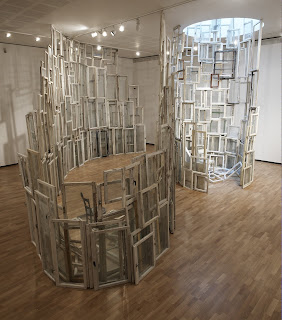 Berlin-based Japanese artist Chiharu Shiota showed one of her impenetrable room-enveloping cocoons of black thread in the Hayward’s ‘Walking in my Mind’ last year, and she does the same to powerful psychological effect here in ‘During Sleep’, a bed caught up in the thread drawing in air which originates in her own childhood dreams and anxieties. So far, so good if single trick, you might think, but the titular ‘One Place’ makes equally rich and spectacular use of 400 window frames collected from demolition sites near the Berlin Wall, making a ceiling-high barrier – albeit one as open as the former border now is – which recalls what people in East Germany could see but not reach before the wall came down. And the installation, with the windows reaching up as if seeking the high skylight, makes for Haunch of Venison’s best use yet of Burlington House. 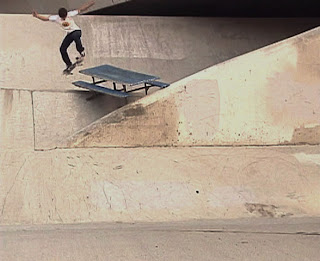 Diamonds on the Soles of her Shoes @ Bischoff/Weiss, 14A Hay Hill – Central

It’s good to see that, following four years in Shoreditch, adventurous continental gallerists Raphaëlle Bischoff and Paola Weiss have reopened in Mayfair. Their first full show there sees Aicon’s Niru Ratnam guest curate a winning choice of three artists who give new contexts to what already exists. Appropriation plus, if you like, from Alicja Kwade, Matthew Smith and upcoming French artist Raphaël Zarka, who stars with his new uses for forms haunted by historical, scientific and cultural resonances. Here he shows beautiful photographs of minimalism found in remnants of built environments and a most diverting four minutes of French kids ‘Riding Modern Art’ – that is, showing off their skateboarding skills on geometric sculptures: Plato brought bang up to date. 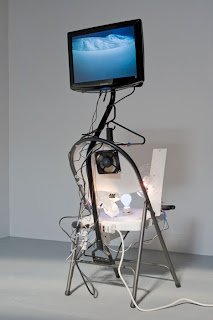 Two more female gallerists with French backgrounds? Mais oui, and Danielle Horn and Marie Favier must be among the hardest-working: very much hands-on in curating and installing a new show every month (no long runs for them!) as well as being the visible day to day faces of Nettie Horn. Their latest brings together four artists who use the technicalities of presentation to illustrate how subjectivity affects what we make of the world. That works most directly in the contrast between New York-based Australian Ian Burns’ mechanical sculpture, which makes the patently virtual look real by means of a video feed which turns a fan-blown plastic bag into a surprisingly convincing field of wind-swept ice; and Benoit Broisat’s reconstruction of a place he has never visited through the testimonies of its residents – the real made virtual. You can also see several of Sinta Werner’s cunningly illusory collages ahead of the solo show she – one of Germany’s best young artists – is due in the autumn. 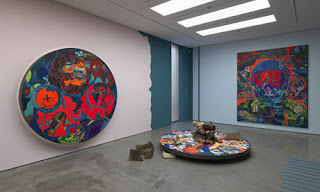 A third White Cube show for the German painter, who sets his pictures in increasingly multi-faceted installations. So what’s it like? Download the 21st century geographies of big cities worldwide, mash up and turn into big near-abstracts with the cubism, dayglow and energy scales set to maximum. Throw in video, kinetics, barriers, detritus, cut-away effects and a pile of logs as the token – if dismembered – organic ingredient, and you start to get a feel for Franz’s distinctively pulsing world. Upstairs is the installation 'Wait', downstairs you are zapped mainly by stand-alone paintings. In a way this is also a chance, following on from Nettie Horn, to see more of Sinta Werner's work: as Ackermann's assistant, she gets to do quite a lot of the painting...

French - wouldn't you know it - gallerist Laure Genillard presents the wide-ranging Swiss artist Uriel Orlow’s beautifully doomy first London solo show, convincingly grounded in a sense of how the future will never escape its pasts. We see a half hour video exploration of Mush, an Armenian housing project near the site of the 1915 genocides which was left unfinished when the Soviets withdrew and which Orlow sees as ‘ruins in reverse, oscillating between the not-yet and the no-longer’. It is shown to a soundtrack of dying stars, sounds which of course we detect long after the stars have vanished. There are also drawings made by tracing the mass-produced ceramic deathmasks which were a curious Russian tradition well into the photographic age, and stare as blankly as the unfinished houses’ windows; and photographs of an abandoned textile factory suggesting that society’s threads will not be pulled together any time soon. Enjoy… 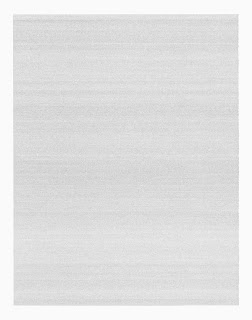 Young German artist Philipp Goldbach's 'Micrographs’ are six foot high pencil transcriptions in necessarily tiny but just-about legible writing of travel accounts and philosophical texts. That is said to be the whole of Kant’s Critique of Pure Reason you can see here, which must be well over a million words – I’m not sure I believe that, but it’s certainly a lot of labour, which makes the drawing, perhaps, its own commentary and an unusually profound and thorough one! As a complement, Goldbach also presents photographs of wiped chalkboards in various German University rooms in which such as Adorno and Heidegger taught: they become abstractions with the trace of writings and ideas past. And to complement Goldbach, Annely Juda are showing Edwina Leapman’s harmonious abstractions on the floor above – and many of them feature a dance of broken parallel lines which have the look of text which has blurred and so cannot be read. 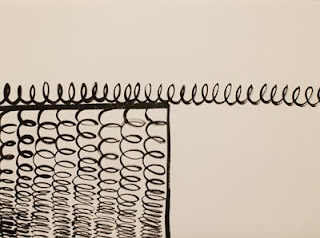 It takes courage to be simple, and young Zurich-based English artist Sam Porritt is courageous in his new show at Brown. 'Life is a Journey' spins off Paul Klee's 'taking a line for a walk' by following the adventures of a looped line within and between a whole gallery of drawings. The looped lines, which become art in the world, the literal subject of the drawings rather than a means of representation, have to navigate straight lines which appear set on blocking their progress - rather like conceptual boundaries constraining the urge towards figuration. What makes the drawings work, I think, are the groupings and titles, which provide a comic back-story to what we see: 'A Good Example of Bad Intentions', 'A Bad Example of Good Intentions', 'Bogus Progress', 'A Journey: The Highlights'. 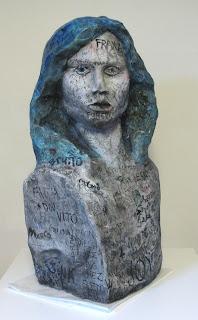 Graham Dolphin has a niche: evocatively scratching very small writing into resonant sites - all the song lyrics onto a record by the Beatles, verses from the bible onto a poster of Kate Moss. I like that niche, but it's still good that his third show at Seventeen takes teenage fandom somewhere else by examining and remaking the myths which have themselves spun off from myths. Thus we see reproductions of alleged pop star suicide notes, influential but of doubtful veracity; a replica of the hyper-graffitied wooden bench that sits in Viretta Park, Seattle, overlooking the site of Kurt Cobain's suicide; and various states (hence the sub-title years), reconstructed from photographs, of the amateurish fan-made bust of Jim Morrison onto which visitors inscribed tributes at his grave in Paris - so reverentially that the bust was itself chipped away and stolen. It's a powerful mixture of sentiment, melodrama and recognition of the power of contemporary myth and the likely origins of myths past - points uderlined by their presentation at several removes from their origin. 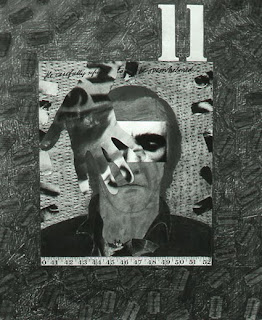 From The Artist's Dream

Ian Breakwell (1943-2005), who was the first artist to be shown by Anthony Reynolds back in 1985, is surely set to grow in reputation posthumously. A major retrospective, 'The Elusive State of Happiness' has just opened at the Quad in his home city, Derby, and this set of 13 works on paper from 1980 provides an ideal advert for it. One big plus for Breakwell is that, where not a few artists rather embarrass themselves if they add their own text to works, he could actually write very sharply - as in the diaries of quirky observation for which he is perhaps best-known. Here the counterpoint of collage, drawing and mock-self-deprecatory text (The artists is a reasonable man. He can account for his time. All his time is accountable. He is calm, cool, he keeps himself in check...) ought to trigger plans to travel to the midlands. Upstairs, incidentally, the gallery blows an equal fanfare for the late Leon Golub ahead of a survey in New York: I don't think that has quite the same justification, but you may disagree...