THE AGES OF MARCH...

This is something of a ‘grand old man’ special. Cork Street is by now the grand old man of art gallery streets, and as a whole is increasingly off the pace - but it still has several excellent galleries. Currently you can see two rather underrated grand old men there - William Tillyer (71) and Paul Feiler (91). Add Alex Katz (82) at Timothy Taylor and William Tucker (75) at Pangolin (and note in passing that Richard Hamilton (88) is currently occupying the Serpentine) and a theme begins to emerge - though there are plenty of young pretenders, too, and not of course all men. So, in order of date of birth, from 1918 onwards, we have: 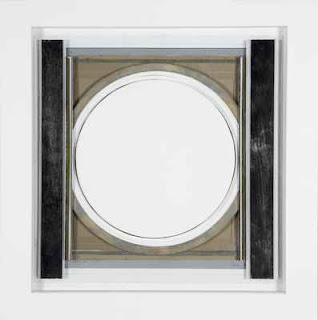 Paul Feiler, who was born in Frankfurt during World War I and interned in England during World War II, showed with Lanyon, Scott and Heron in the 1950’s. This 70-work survey takes you from more generic school of St Ives work through to the 'circle in square' motif on which Feiler has focused obsessively in recent decades as he came late into his characteristic voice - though there is no work from the 70's or 80's, perhaps related to the long-lasting Redfern representing Feiler only in the 50's and since 1993. Playing on the palindrome of his name (Feiler-Relief), Feiler often uses intricate constructions in order to complicate the painted space – most recently exploiting the way pieces of perspex can be seen and seen through and react to their surroundings. The total effect is a geometrically-based intensity which takes on a spiritual aspect with the suggestion of something unknown lying beyond a shrine-like gateway: consonant with Mondrian's goals,perhaps, but retuned to Cornwall's atmosphere and colours. 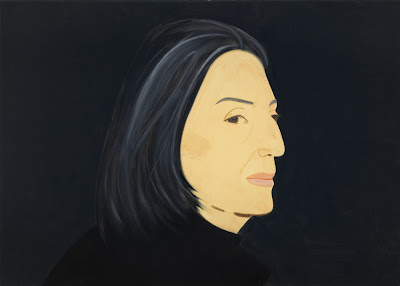 I'll be honest and say up front that the now-very-fashionable American painter Alex Katz (born 1928) hasn't been a particular past favourite of mine. All the more interesting, then, to find myself struck by the dramatic and large scale emergence from black of the latest portrait of his poised and elegant wife. Ada Katz (née del Moro, a biologist from an Italian family in the Bronx) can surely claim some kind of muse record, having been Alex's constant model during more than fifty years of marriage. She is well into her seventies now, but her husband's cooly elegant style of fluid wet in wet simplification has no place for wrinkles, and she certainly looks enigmatically good on it here. It's no surprise, then, that Katz has called her 'the perfect model', being 'both a European beauty and an American beauty'. Reason to look forward to the National Portrait Gallery's Katz retrospective, scheduled for 15 May - 21 September. 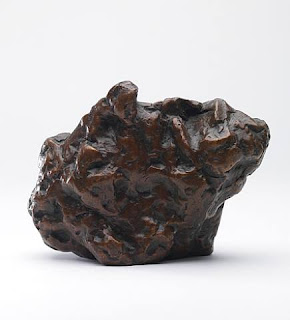 William Tucker (born 1935) was one of the most visible sculptural presences in Britain among the post-Caro generation, but leaving for America in the mid-seventies has reduced his profile here. The foundry-linked gallery Pangolin is well-placed to rectify that with a mixture of maquettes and full-scale bronzes from the last two decades. Tucker’s method is to look for chance forms in the abstract shapes he makes in clay or plaster, and then exploit them. What at first appears to be a hulking non-figurative man-sized lump resolves itself into – say – a giant hand from one viewpoint, but remains resolutely abstract from other angles: the perceptual to-and-fro carries on. Another potential layer is added by the titles, often resonant of the ancient past from which these could be fragments. Don’t miss the extra drawings in the windows, and two of the biggest and best pieces – the fallen head of ‘Emperor’ and the massive take-off readied foot of ‘Messenger’ – in amongst the sculpture trail dotted round the concourse. 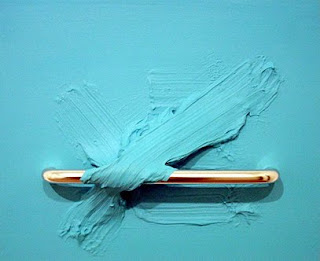 Bernard Jacobson is giving William Tillyer (born 1938) the compliment of a four-show season: prints, paintings, watercolours, new paintings. The second part, which defines 'paintings' very broadly, reveals him as a man of metal and cloud. The metal is seen at its purest in the radically geometric early piece 'Fifteen Draw Pulls' and at its best in the recent works in which the modernist grid is made literal in the form of steel lattices which serve as the ground for paint. The clouds range from painterly and etched evocations to a cabinet of pebbles transformed by the title 'Twelve Stacked Clouds'. The two come together in 'Aluminium Cloud', one of a series in which, to quote Tillyer 'the surfaces and structures of the support were to be as a piece of hardware, and as an obstacle to the paint as a protest'. All of which - and more, such as one painting so bursting with ambition it has to be held back with nylon straps - reveals just how ceaselessly enquiring and innovative Tillyer has been in his combinations of man-made and natural sources over the past 40-odd years. 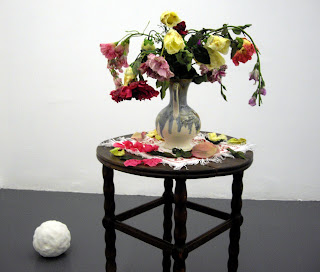 French artist Pierre Ardouvin (born 1955) ranges widely, with previous work having spanned wheelbarrow people, an animated rubber ring and a bumper car with slowed-down karaoke. He aims to be wittily bleak, so it fits that the light which tracks your movements around Museum 52's back space should do so to mechanically-narrated fragments of Samuel Beckett. To get there you must pass through a stage curtain undermined by holes and an incongruous installation of flowers (on antique tables) and snowballs (on the floor). The latter are obviously fake - though even so, who threw them? - whereas the former are wilted and dying. What would be the point of making artificial flowers in that state? But fake, of course, they are. Add some collages which turn postcards into something else - such as a stalactited cave into a shaggy dog - by the addition of adjoining watercolour, and you have a perversely contradictory show, the exact atmosphere of which is just about... unnamable. 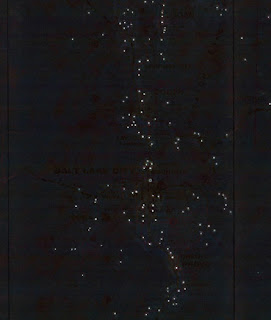 It’s not unusual to find work which has a very different impact from afar than from up close (Chuck Close, for example). But these map works are impressively different from not two but three distances: from well back they look like black monochromes; from five feet away they look like the night sky, an effect caused by London-based Irish artist Kathy Prendergast (born 1958)inking out everything but the points of settlement; and from up close, when the names of the towns and other details can be discerned, they look like ominously redacted versions of Ecuador and Poland (to name two of the six). They are also, as Catherine Nash says in the informative accompanying booklet, ‘the product of abstracting and selecting from maps that are already abstractions, reductions, already partial’ and push the cartographic method further ‘to reveal an ambiguous poetics of pattern and absence’. 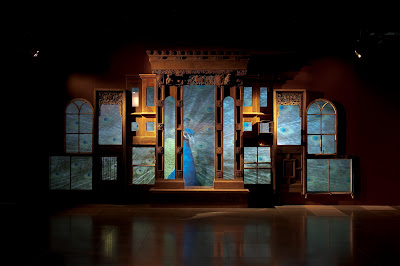 What are the most innovative public spaces in London? They may not get the publicity, but you could certainly make a case for the Barbican’s Curve and the British Film Institute's gallery. Which YBA has had the best shows recently? He may not have the public profile of some others, but you could certainly make a case for Mat Collishaw (born 1966). He has been developing convincing new series using squashed butterflies, zoetropes and moving images in mirrors; and hot on the heels of his resonant matches with the Freud and Foundling Museums, has a spectacular new work at the BFI. ‘Retrospectre’ was commissioned to respond to a season of films by the cult Armenian film director Paradjanov, which it may well do, but it feels pure Collishaw: five minutes of psychologically-charged video collage – horses, lightning, animal cries, peacocks, smoke - are dramatically back-projected on the multiple screens of what he calls ‘a sort of wooden shrine, most of the width of the gallery space, made from salvaged sections of alterpieces and old sash windows’. Hold on to your pneuma, to use a word at one with Collishaw’s Victorianist tendencies… 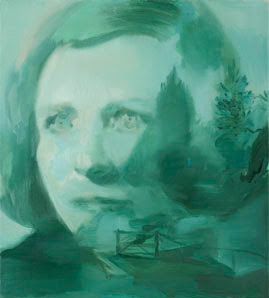 I do believe that most of me floats under water

This fourth solo show with Maureen Paley for Kaye Donachie (born 1970) sees her supplement her paintings with an engaging 20 minute selection of short films. These range from the out-takes remaining from a lost film involving Duchamp to James Broughton’s ‘High Kukus’ reflections from a lake (‘never expect anything’ said the tadpole ‘and everything will surprise you’) to Edna St Vincent Millay reading a section of her poetry journal, which provides titles for the paintings:

I do believe that most of me
Floats under water; and men see
Above the wave a jagged small
Mountain of ice, and that is all.
Only the depths of other peaks
May know my substance when it speaks,
And steadfast through the grinding jam
Remain aware of what I am.
Myself, I think, shall never know
How far beneath the wave I go.

The films pick up on Donachie’s typically intimate engagement with historic countercultures, also seen in the six portraits of female icons such as Mina Loy, Nina Hamnett and Millay. What I like most, though, is how their faces are variously integrated with night skies, landscapes and still lives in a sort of muted take on surrealism which left me wondering whether the women are interiorizing or overwhelmed by their environments. 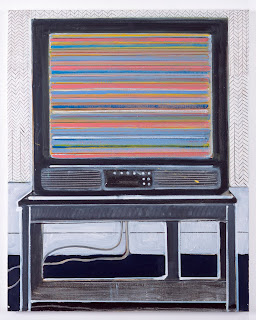 Alex Katz came to mind, and not I think just because I’d seen his show a few hundred yards away, in the recent work of LA painter David Korty (born 1971). Some of the same easy simplification, clear colour (whereas Korty used to have a penchant for the chalky) and melding of abstract elements into figuration. All of which works best in geometrically-inclined objects with a touch of Stuart Davies: a telephone booth, a gas pump, a television. The mask-like or actually masked faces in other paintings are less engaging, as if to suggest – paradoxically, perhaps, through the most traditional of media – the danger that the means of communication can nowadays hold more interest than the people we reach through them. Don’t miss the side room, which runs the themes through twenty-odd seductive watercolours. 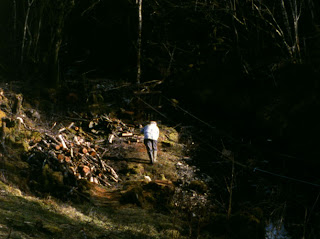 I’m always a little disappointed if a video – however good – is presented no differently in a gallery than it might have been at home. This is more like it: English artist Ben Rivers (born 1972), new to Kate MacGarry’s roster, very visibly uses analogue film – old stock with scratches and blips built in as if pre-distressed for an archive – and he presents it in a ramshackle hut. That’s doubly appropriate: first, because Rivers is thematically interested in the construction of worlds, for example by filming models as apparent realities, or tracking down loners living outside society; second, because this particular constructed world is that of an old man living in just such a hut in the Scottish highlands – his idyll, perhaps, if not all that luxurious. In it we see 16 minutes of beautifully gloom-lit footage focused on the man’s eccentric engineering and his forest surroundings while we hear him talk of a life-long obsession with evolution – all of which achieves an unsentimental acceptance of how people themselves turn out.