NOT SO OBVIOUS IN APRIL

By and large the big shows in the big galleries may be best - but the smaller galleries and temporary spaces and sub-projects of major players offer the pleasure of the less expected, the chance to make discoveries ahead of the curve, the gallerist there to talk to you in person rather than an assistant - all of which may come with high quality, too. In which spirit I have this time around set aside such excellent shows as at Camden, the Parasol Unit, Alison Jacques, Lisson, Modern Art and the Dulwich Picture Gallery to stick to what may for various reasons be a little less obvious... 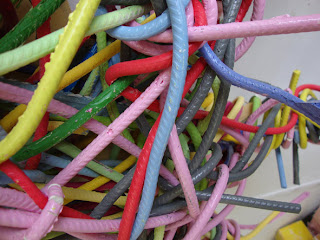 The visibly non-commercial Primo Alonso – just east of the Hackney City Farm – has been run rather heroically against the odds for three years now by young artists Angelica Sule, Paul Murphy and Richard Gallagher. In this typically adventurous installation guest curator Piers Secunda (born 1976) shows a new work made from some half a mile of wires sculpted with paint. He’s joined by Lothar Götz, who gives the show an architectural stage through colour blocks on the walls; Natasha Kidd, who pumps paint round the space like a vital fluid; and George Barber, who shows a film of action painting carried out by cars. It’s an uplifting totality: not a canvas in sight, but full of the joy of paint and colour unlimited by any such constraints. 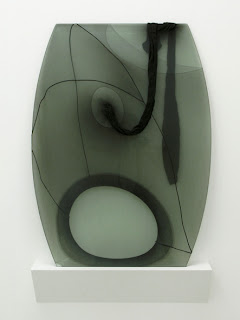 My Work Here is Done X

Simon Christopher’s unmarked first floor space on a back road two turns off Mare Street is in the middle of a run of shows by recent RCA students. Steve Bishop has already gained attention for his sculptural combinations of taxidermied foxes with neon tubes, but ‘Sheer Fatigue’ is much cooler fare. ‘My Work Here is Done’ is a series in which said tights are stretched around glass from coffee tables and TV stands to make fetishised abstractions which achieve improbably painterly effects by exploiting the accidents of process – most of Bishop’s work here is done in the selection of materials. Another accident is implied by smashed safety glass from just such panels (it does shatter, right enough, but not into jagged shards). That litters the floor and links the tights, along with the pun on ‘sheer’, to the cracked paving stone of the photograph ‘Sheer Fatigue’. Not just tights, but tight. 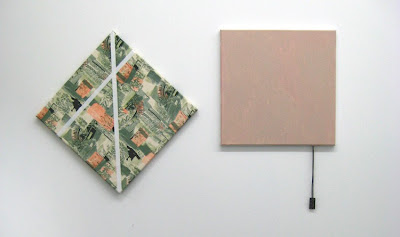 A garage hidden in a side-street near Sadler's Wells, open six hours a week and showing just a few Dutch metapaintings? That's as non-obvious as it gets, I grant, but Bas van den Hurk's work is actually well worth seeking out. When I say he makes metapaintings, I mean that rather as a philosopher is more interested in the question 'is there a world in which lunch will occur?' than 'what's on the menu?', Van den Hurk is more interested in the question 'is that a painting?' than 'what is that a painting of?'. What if, for example, the picture represents itself but hung askew, or a necklace is hanging off the bottom of the canvas, or a cheap reproduction of a previous work forms the background? What if, just as you are marvelling at the painter's skill in capturing a marbled pattern, you notice that the canvas is, in fact, covered by a printed fabric? The questions go back at least as far as Frank Stella and Blinky Palermo in the sixties, but Van den Hurk's fresh examination generates its own aesthetic. And part I of the show? It's in Amsterdam, obviously. 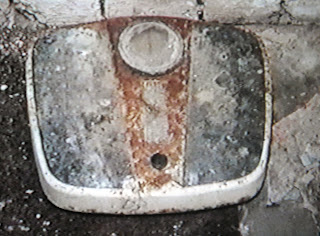 The bathroom scales from 'Home Suite' (Voice-over:'I don't trust them all that much actually'.)

The RCA students of curating have put on a large overview of the films of John Smith, ranging from what he himself made at the RCA forty years ago to brand new material. There are 16 works which would take six hours to watch in their entirety, but they're made navigable by excellent presentation: varied installations; run times clearly given; medium length items can be started on demand; longer more narrative items - though Smith loves to pull you into a narrative then out again by revealing its artifice - have advertised start times. Smith's most consistent strand sees almost perversely banal images given a humorous and revealing spin through his deadpan and structurally savvy commentaries, playing, for example, with how sound can trump image. Thus in the seminal 'The Girl Chewing Gum' (1972) the director of a film absurdly pretends to control action he is merely describing; in Home Suite (1993-94) a tip of a house is described with implausible affection; and in Hotel Diaries
(2001-07) the hotel rooms are all we see of the narrator's international experiences. And it's a measure of Smith's range that this magnificent show still omits a couple of my favourites. 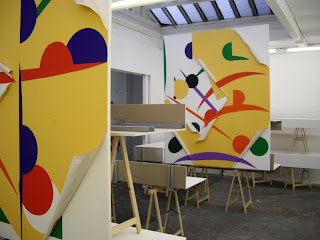 Berlin-based Henning Bohl (born 1975) has his first substantial show in England at the artist collective’s space tucked away near Angel tube. It’s a playful and theatrical take on painting as sculpture. While perversely embracing the constraint of a pre-determined set of forms – abstracted from Kabucki Theatre faces – which he reworks obsessively, Bohl resists the more familiar expectations that works look pristine (sections appear to be peeling away from the canvas like curling posters, creating a novel aesthetic) and that paintings be hung on the gallery’s walls, which he pretty-much mocks by choosing instead to show them on elaborate trestle constructions. The title refers to a painting by the Liverpool pre-Raphaelite William Davis – an appropriately eccentric way for Bohl to indicate that he will not be following conventions, Davis having focused on an unregarded aspect of the scene. I wasn’t convinced that layer was necessary, but it does give a suitably implausible title to a show which may sound rather academic but feels far from stuffy. 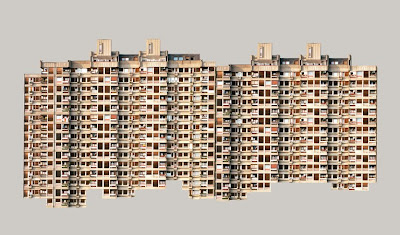 Flowers is 40 years old this year and not the most obscure gallery - but it would be easy to overlook a small exhibition hidden above the Peter Howson show in their big East End space. Howson himself provokes strong feelings, but those of a sensitive disposition can rush upstairs to the young Serbian photographer Benjamin Beker. He has developed three interesting sets of work out of the former socialist republic of Yugoslavia: cleanly edited re-presentations of monuments; the interiors of former government buildings; and as shown here, would-be ideal housing fallen on tougher times. In the 'The Blocks' Beker combines documentary elements to make artificial constructs in a way which resembles the curious nature of Yugoslavia, which was a melding of different nations into an artificial whole. His punchily attractive work deals, then, with the often tenuous distinctions between the real and the artificial, and with the disappointments but also the persistence of failed dreams and lost ideals.

See www.flowersgalleries.com/exhibitions/3872-blocks/ for my interview with Benjamin. 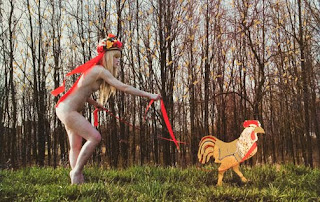 Keep going north up Wharf Road past Victoria Miro for the surprisingly large Waterside Project Space, where you’ll find the work of eight artists who were teenagers when the Berlin Wall fell – see also Benjamin Beker above – and so have a ghostly view of socialism tied in to their memories of childhood. We see that mixture most directly in Ştefan Constantinescu’s beautifully constructed pop-up book ‘The Golden Age for Children’, an ironic history of Ceausescu’s Romania. But my favourite work here is Czech émigré Tereza Bušková’s (say ‘Bushkovar’) surreal ten minutes of ‘Spring Equinox’: it merges rural Moldavia with performance art in a celebration of traditional costumes and rituals, pointedly leapfrogging the communist period to make for a bright vernal fillip. 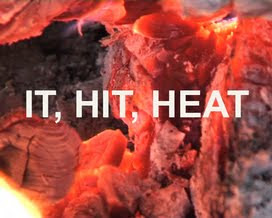 Tate Britain’s Lightbox is a more extreme version of my Flowers argument above - that a small show hidden in a big institution is easily overlooked. There you should allocate twelve minutes for a video mugging from London-based French artist Laure Prouvost. She starts - on the big, in-your-face screen - with the warning that the six minute film ‘requires all of your attention. Each detail of Part 1 will be essential to Part 2’. Her weapons are a dizzyingly rapid stream of mismatched images and words and a menacing drum. The countdown structure seems to imply a violent happening, but the narrative is as blurred as the style is sharp. There are instructions and tests. You will fail, I predict, but stay on for a second attempt. 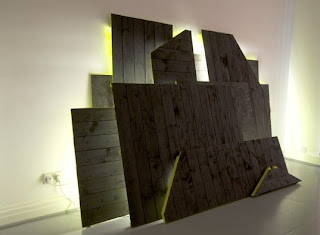 Is Victoria the new Hoxton? If you add the lively stack of three galleries at 276 Vauxhall Bridge Road (in a one year project initiated by Edel Assanti) to Eleven, Orel, Postbox and the Delfina project space then you have the makings of a lively zone. The last of those is the area’s current stand-out: there the sculptor Nathaniel Rackowe, known for his liminal and theatrical light-spilling takes on the contested territories of modernism and its architectures, shows new work from a residency in Beirut. One boundary which Rackowe explores more fully than before is that between two and three dimensions. He moves towards the two dimensional in sculptures formed by a corrugated roof on the floor and a flatpack kit for a shed against a wall, and arrives there fully in the first paintings/drawings he has exhibited: a duo-toned series which stays true to the built environment by combining bitumen and household gloss to great effect. They are based on features isolated from building sites in Beirut, where incidentally Rackowe went with his wife,Rana Begum, whose equally good show preceded her husband's at Delfina. 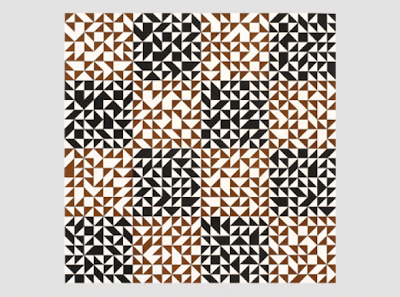 Talking of husbands and wives, a major Albers retrospective may sound decidedly mainstream - but this is Anni Albers, not yet another presentation of Josef's homages to the square. Sexist attitudes restricted Anni (1899-1993) to the textile workshop at the Bauhaus in the 20's and early 30's, but she became the most famous weaver of her day. She was also, to quote the ceramicist Edmund de Waal (a fan who gave an illuminating introductory talk and is showing with her at Alan Cristea) a 'ferocious teacher' and 'polemical writer'. Albers switched to prints from 1963 onwards, and they're all here. The rhythm and seriality of the loom may lie behind her use of repetition 'not just as a way of pacing a life, but as a way of making sense of what you do' - de Waal again - though they are much more geometric and less handmade in appearance than one might expect from her background. For me, they work because her energy comes through: a favourite motif is multiple triangles, and they really do dance.