ALISON GILL: TO SEE A WORLD 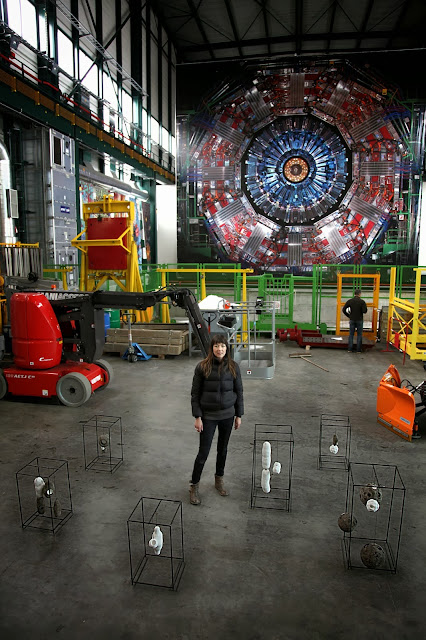 The Compact Muon Solenoid (CMS) is one of the four experiments on the outskirts of Geneva at the Large Hadron Collider at CERN* in Geneva, where a scientific community of 6,000 work at the furthest edge of sub-atomic knowledge. The sophisticated 27 kilometre, 4 metre diameter tunnel in which protons are smashed together at close to the speed of light is itself a stunning sight, well captured by Michael Hoch’s cross-section photograph installed at life size in the entrance hall behind the artist in the shot above, taken during the installation. To See a World was in a hall directly above a tunnel access point.

An exhibition on this site is bound to raise the question of the differences between science and art. Alison Gill is a good choice in that context: she trained as sculptor, teacher, has studied psychoanalysis, and has taken a keen interest in scientific and mathematical matters – as illustrated by the drawings of knots which she is showing alongside her sculptural installation.

The way Gill operates bears comparison with the position taken by the American philosopher Willard Van Orman Quine (1908-2000). He came to prominence by opposing the well-established distinction between analytic and synthetic truths. Previous orthodoxy held that the former, such as ‘2 +2 = 4’, are true by virtue of the meaning of their words and terms, and remain true come what may; whereas the latter, such as ‘snow is white’, require the evidence of extra-linguistic facts in the world.  This might be seen as paralleling the contrast between the logical investigations of a physicist and the artist’s more instinctive pursuit of meaning. Quine held a holistic view under which the truth of a particular statement depends on its position in the surrounding discourse of statements, and in which statements might be located on a continuous field. Imagine that field as a circle, with the external world surrounding it: synthetic statements would be towards the edge, readily affected by observation of the external world; whereas analytic statements would be found towards the middle - it’s not that they can’t be changed, but that a great deal needs to happen to produce an effect so far from the periphery. To illustrate how that might work, Quine himself suggested that as a result of all the developments in physics in the 20th century, there’s a plausible case for replacing classical logic by quantum logic.

So, in Quine’s view, there aren’t the sharp divisions we might expect between types of knowledge; and he claimed that it’s the whole field of knowledge, not just single statements in isolation, which are to be verified. All scientific statements are interconnected, and we should judge the truth of the explanatory system to which they give rise. Contemporary art operates similarly, in that almost anything can be presented within the framework of art, and the effect and meaning of any one work often depends on its place in the whole nexus of art’s history and current practice.
It makes sense, then, that Gill’s work brings together interests in topology, the physical sciences, psychoanalysis, folklore and, of course, art; yet does not treat those as different in kind, but as points of equal interest on a continuum. That makes it appropriate to suggest an affinity with Blake, who was writing at a time when poetry, philosophy and science felt like part of one large project of enquiry.  The discipline of sculpture suits this approach, given that, as Gill herself says, ‘it is dealing with matter and its absence, material both seen and unseen’; and that leads her into what she calls ‘the dimension of not knowing’.

So how does the work which Gill has made for CMS at CERN fit in with this? In the six sculptures which make up Stranger Than Paradise, magnetised objects hang in steel frames with dimensions taken from Giacometti’s early Surrealist works. They operate in abstract terms, but also reference scientific modelling, and in doing so they alternate between micro and macro levels. Just what are those cratered balls with blind alleys, tunnels and holes? Atomic particles? Planets? Or people in relationships? Gill points to the potential narrative of those relations through the sub-titles of these pieces, all of which incorporate a fairy tale which can also be read as linking to one of the six particles which are quarks in the Standard Model: Sleeping Beauty (Beauty/Bottom); Rumpelstiltskin (Strange); Tom Thumb (Down); Rapunzel (Top); Frog Prince (Charm) and Magic Bean (Up).


The science of Stranger Than Paradise is too simple to deceive. Everyone understands magnetic force. Yet a residual air of mystery does remain whenever bodies act without visible cause. And if the objects do stand in for people, they put me in mind of how behaviour can appear to come from nowhere, even the extremes which are seen in those early Giacometti sculptures.  Our speculation as to causes will be rooted in psychology rather than science. That might set us wondering, though, whether the former might eventually be reduced to the latter through an ultimate understanding of the chemistry and physics of the brain, just as the sculpture’s interactions can be explained by magnetic and gravitational laws.

What are the shapes, by the way? Gill explains that they all began from either the sphere or a Russian doll, and that, too, provides an appropriate combination of contrasts: they start from either perfect rationalism, for which read science or maths; or from a sequential concatenation of myth, from art or religion. 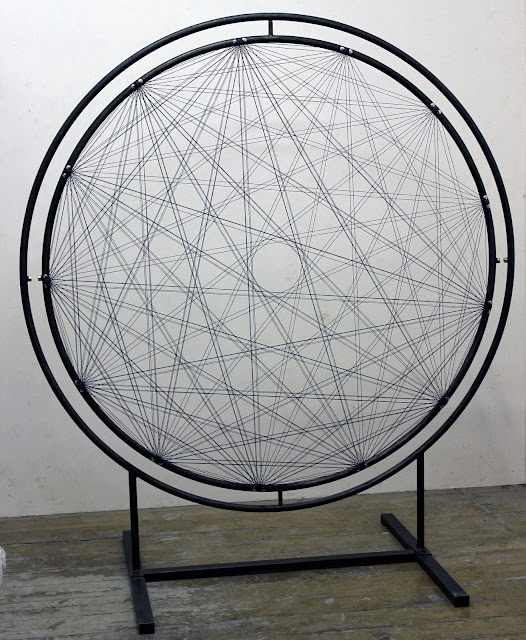 Detector (Kissing Gate) also uses the invisible force of magnetism, but to rather different effect – to influence the opening, closing and turning of a sculptural circle which becomes a portal. Here again the art and non-art references come together. This is a gate, a potential point of entry to alternative experiences, including, perhaps, the magnetic attractions of romance.  It also looks like a bicycle wheel removed from its context, which summons Duchamp’s first readymade. The sculptural placement of string across a hole brings Barbara Hepworth to mind. But its pattern takes us back to Gill’s interest in topology: it’s a ‘Mystic Rose’ produced by linking equidistant points around a circle to each other. 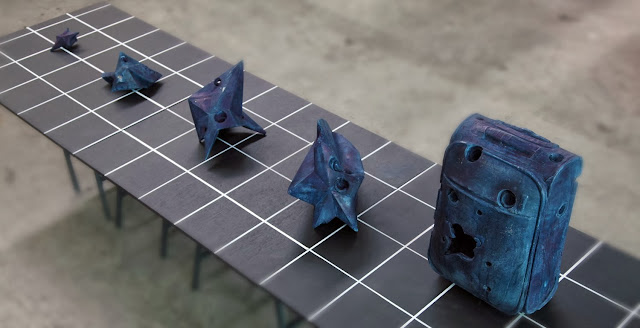 Space Matter Problem (50 x 40 x 20) completes Gill’s set of CERN pieces. It takes off from cast forms of some banality: a carry-on suitcase designed to fit the stated maximum measurements allowed by airlines, and a star-shaped perfume bottle. Those are subjected to changes in the manner of a scientific experiment in form: the plaster casts are folded, fragmented, have holes cut into then and have been thrown down stairs. They’re covered in chemical indigo – the colour traditionally used for night skies in illuminated manuscripts – and peppered with starry traces of mica. The multi-form results are arranged   according to scale on tables which are actually the art-meets-maths-meets-academia surface of blackboards with chalk grids.


There’s a fiercer energy implied here than in the magnetic pieces, and the damaged suitcase may suggest that an on-plane explosion has occurred. But that’s not out of place: there is an obvious violence to the Hadron Collider’s extravagant electromagnetic enforcements. And the evolution of the atom bomb will always lurk behind such experiments. Gill’s own thesis on Giacometti's Surrealist work was called ‘The Poetics of Destruction’, and a quotation from that picks up on the connection between destruction and desire, another holistic aspect of reality: ‘Giacometti sought to understand reality and to survive it. He worked in the hope of grasping the whole of his vision. This was his desire. Bataille viewed 'destruction of what is there before the subject' as the premise for 'the enactment of desire'. He wrote ' Art since it is constantly art, proceeds in this by successive destructions. Thus in so far as it liberates instincts, these are sadistic.'

Alison Gill shows us that, whether or not you can ‘hold infinity in the palm of your hand’, you can pause in the course of momentous scientific investigations to take in another perspective on the haunting unity of what surrounds us.