On with the New, starting with the old. And, as it's cold, moving on to a fire and then to Venezuela, where the temperature reaches 30C most days in January. And then back to the old, with a list of favourites from 2013... 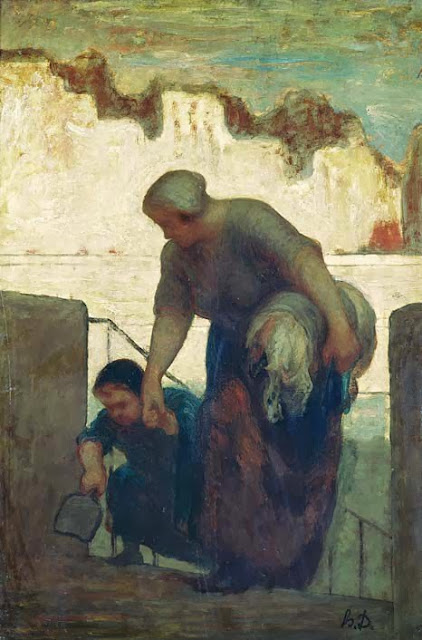 
This 130 work survey of Daumier has to be seen. Though best known for his satirical cartoons - which are indeed punchy - equal weight is given to Daumier's parallel expressions of empathy for the lot of the poor in his financially less successful outpouring of sketches and paintings (such as the laundress with bundle and her child with clothes beater, above). They're all made from memory out of his experiences walking the streets of Paris - hence, perhaps, the intensity of their focus - and build on a brilliantly nervy, Giacometti-like drawing technique, not only to reflect on the burdens of social inequality and also to analyse the pleasures and foibles of the art world.

Aaron Young is best known for ‘painting’ via motorbike tracks, but here’s a different triple whammy: psychologically charged images are printed onto sheets of aluminium folded as if for a giants' coke session; car bumpers (or ‘Spoilers’ in Young's  American English) are tinted and buffed to Juddesque perfection; and seven canvases are burnt and watered so that Yves Klein’s fire meets Warhol’s piss painting to yield delicate effects. Their variety, said Young, is down to the control of a nozzle with seven settings. These are studio works, but given a dark local presence by being named for our 2011 riot locations and mounted in a room which Young comprehensively prepared with his blow torch.

At 90, Carlos Cruz-Diez continues not only to make work, but to find new ways of pursuing his investigations into the effect of viewer placement on the perception of colour. There is no pink in Sitges 1-4 above, as is obvious when the viewer gets close, yet hard to believe when a few feet away. He’s one of four Venezuelans in an excellent seven-artist look at how print-related techniques feed iteratively into wider practices: Jesus Soto is the other classic, with Emelia Sunyer’s lithographic style of pressing paint onto canvas and Cipriano Martinez’s print-paint dialogue showcasing a younger generation’s explorations. 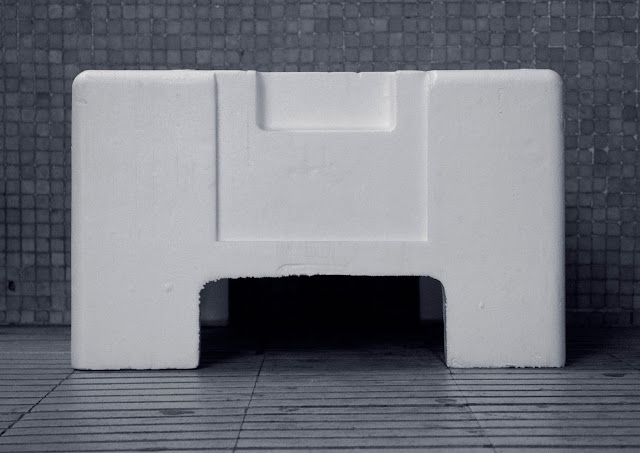 Fred Mann has rejigged and rebranded so that – though he himself will have a hard time not being Fred – his gallery is now New Art Projects.  The first show under that name sees Venezuelan Ricardo Alcaide take on South America’s maldistribution of wealth through would-be-minimalist stylings which turn out to relate to the makeshift shelters of Caracas’ homeless.  Those are the coloured shapes painted over the city’s plushest homes, as featured in the local edition of Wallpaper magazine. Downstairs, atmospheric black and white photographs of street detritus – a milk crate, a stack of wood, a polystyrene packing insert – stand in for whole modernist buildings, a mirror imaging of the logic upstairs and chiming neatly with the gallery’s 50’s staircase.


Much as I like to walk into a favourite artist’s new show and feel at home, it may be even better when their practice gives you no idea what will come next: here, apparently real left-overs from meals – actually constructions  – are ranged around the walls as if Daniel Spoerri has turned to painterly abstraction; in the centre, four expressionistically unnatural people, made of concrete and lolling on blankets, turn out to be slathered mannequins complete with real racquets, skis or paddles depending on sporting preference.  Why? Simon Dybbroe Møller’s own parodic text points to the passivity of our engagement with what used to be active, from food as social media spectacle to sport as immobiliser of viewers – which oughtn’t to extend to not visiting his show in person.


This interesting show, being Part 2,  mirrors Part 1, which ran in September with different works by the same six artists. As before, the highlights are Michael Wilkinson’s Lego abstract (a white column then, a black square now, of thousands of bricks) and the best British chance to date to see one of my favourite French painters. There are three of Bernard Piffaretti’s 30 year stream of paintings in which he starts with a  vertical line, then aims twice at the same experience of painting, right side first. The bewitching results close in on mirror and diptych alike, while asking us to ponder whether the near-repetition negates or reaffirms the original. 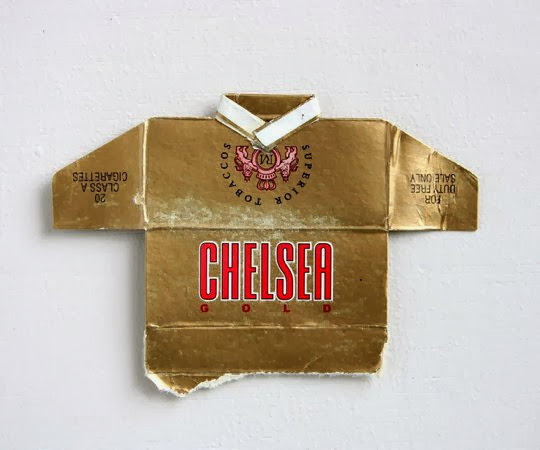 Leo Fitzmaurice's punnily titled collection of the tops of 300-odd fag packets, picked off the street by the artist and flattened into approximations of football shirts, proves a surprisingly rich cod-anthropological museum display of variably battered graphic design. The scatter of apposite names (Chelsea, Sky, Lucky Strike, Goal and Derby are all cigarette brands) also carries a subversive edge, as the implied sponsorship of shirts by tobacco companies would be illegal. Moreover, the 22 different designs on each table top would lead to a radically confusing line-ups of 11 vs. 11...


A cat watches a wine glass rotate as it’s spooked by light in Helen Maurer’s Prowler, a work which felt endangered at the private view - though why shouldn’t found objects return to circulation? - Danielle Arnaud’s Kensington redoubt. Yet this show, on tour with two extra artists and a text by Peter Suchin, picks up on the alchemy rather than the cat or the glass, notably in William Waterhouse’s beautiful bubble-making machine and Sarah Woodfine’s table of drawn sculptures of the ingredients – bat, chrysalis, root, frog – of a witch’s brew intended to incite the sensation of flight when ingested. The cause, according to Woodfine, would have been the palpitational effects of contrasts, a sense of which we do pick up in the stimulating mixture here.


Both levels are given over to large and impressive preparatory works for the murals Peter Lanyon (1918-64) made during 1959-63 for Liverpool and Birmingham Universities and a New Jersey collector. His way of abstracting from a landscape to convey its sense of place and how it feels to move through or over it – as in the glider in which he crashed fatally -  translates fully to this format.  Perhaps one can go further and quote Heidegger: does Lanyon get at how ‘place places man in such a way that it reveals the external bonds of his existence and at the same time the depths of his freedom and reality’?

Sotheby’s new space Sǀ2 is for private sales, but can also be described as a pretty big show space. Up now is a 26 work survey of the Düsseldorf school of photography: the Bechers, Gursky, Struth, Ruff, Hütte and Höfer are all present and focused with their varying strategies of rigour.  I’d single out (‘quadruple out’?) Hütte’s dank forestscapes, Struth’s ability to find his characteristic perspectives even in constricted Venetian calles, Ruff’s complicated all-male black and white classicisations of pornography, and the obvious star: Gursky’s Cocoon 1, over 10 square meters of exacting hedonism.

What’s this? We’re fairly used to the humble’s homages to the famous, but here such luminaries as Miroslaw Balka, Jean-Luc Moulène and Tonico Lemos Auad put forward their own works as tributes designed to resonate with those of an artist of whom you may know nothing: Trevor Shearer (1958-2013) was an influential teacher but chose to show his own work very little. Yet it fully justifies his company: whether casting a basin from graph paper filming the hop, skip and vanish of a water drop on a hot plate; or pulling off the sculptural trick of seeming to hide behind the wall, his work is subtle, grounded and precise.

It seemed to be a good year for double shows. Looking in no particular order at the geographically-constrained selection of what I actually saw (London unless stated) my favourites were:

Sanja Iveković at Calvert 22 and the South London Gallery


There were single showings, too. I particularly liked:

Richard Serra at the Courtauld

Frederico Barocci at the National Gallery

Sarah Lucas at the Whitechapel

Honoré Daumier at the Royal Academy

Shana Moulton in performance at the Royal Collage of Art

Ciprian Muresan at Plan B, Berlin

Shunga at the British Museum

I didn't think about it in compiling, but have only just noticed that Bedford's finest, Andy Holden, turns out to be the sole British artist on the list and only 5/20ish are women... I could have corrected some of that by including shows I curated (Maria Marshall: Voluntarie Service; and It's About Time) or wrote catalogues for (Young Gods, Alzbeta Jaresova, Alison Gill, Phil Illingworth, Daniel Lergon).