Show Us Your Process features abstract paintings which employ unusual means of making to explore material processes with the potential for broader metaphorical meaning.

What qualities do all paintings have in common? They don’t have to use paint, for example, or be applied on a ground. Perhaps the necessities are only that they use a production process and present abstract qualities - which even a hyper-realist painting will have. Here are nine painters who foreground those two aspects: they use a visible process to make abstract paintings, as if seeking not pure abstraction, but a painting which represents its own making. Moreover, they don't use conventional painting methods, and - consistent with that - they don't pretend to be fully in control. They set the matter running, but chance intervenes, and indeed is welcomed. My selection is of well-established European artists, and you could add Simon Hantaï, Imi Knoebel and Bernard Frize as prominent practitioners. Young American painters have recently gained considerable market favour through work of this sort. Some of them are indeed interesting, but should there be more attention paid to Europeans who were using comparable processes well before them?The emphasis on process may sound an inward-looking game, but there is considerable pleasure in deducing the method used and seeing how its logic leads to the result. Yet the world does enter in various ways, and that provides an additional subject. Tony Charles and DJ Simpson set up a clash between the forces of art and industry, and both use mechanical tools to subtract material as their primary means of intervention. Alexis Harding encourages gravity to do its stuff, while Daniel Lergon provides chemical analogues for the formation of the cosmos, and Shane Bradford combines a geologically styled process with a personalised one. The deconstruction of painterly tradition is particularly clear in Jonathan Parsons' reversal of normal figure / ground relations, Tom Hackney letting Duchamp’s non-art production determine the form of his modernist grids, and Neil Zakiewicz entrusting a third party with his chance element so that – reversing the norm – he makes the surface but doesn't paint it. Michael Stubbs may not use a brush, but does employ classic pop and abstract expressionist moves – yet in an ironic and confusingly layered manner.

All of which could result in clever but inert paintings: the key is that it doesn't – the nine processes have led to nine distinctive and dynamic abstract aesthetics. 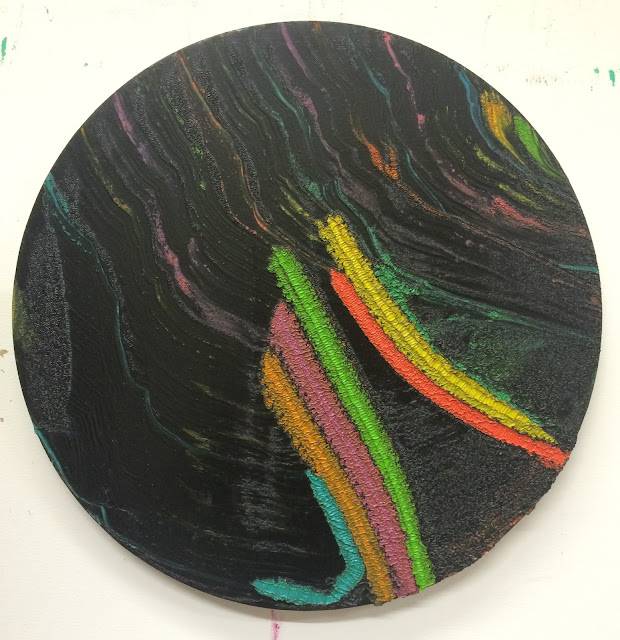 Alexis Harding’s entropic abstracts start rapidly as he pours household gloss onto a ground of incompatible oil paint. Then they develop over months as chemical interaction, gravity and rotation collide contingency and control to arrive at a point of suspended movement suggesting, perhaps, the skin of a body in time as well - in this tondo format - as a clock. 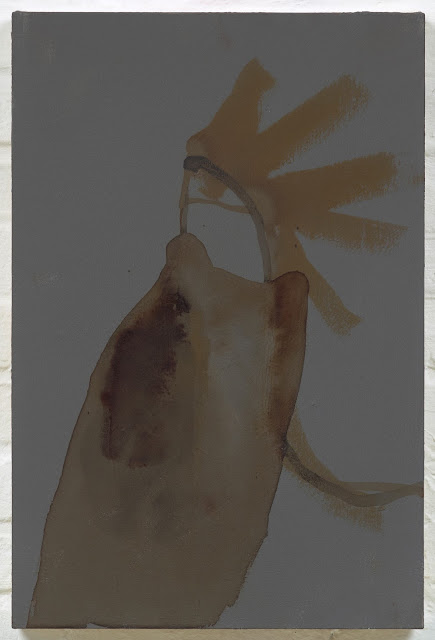 Berlin based Daniel Lergon uses a wide range of non-paint materials to blend of science and art, investigating the fundamentals of both painting and the universe. Here pulverised iron is ‘painted’ with water, so that forms emerge out of the resulting oxidisation as rust. Colour created by such direct chemistry connects to Lergon’s wider investigations of cosmic history. 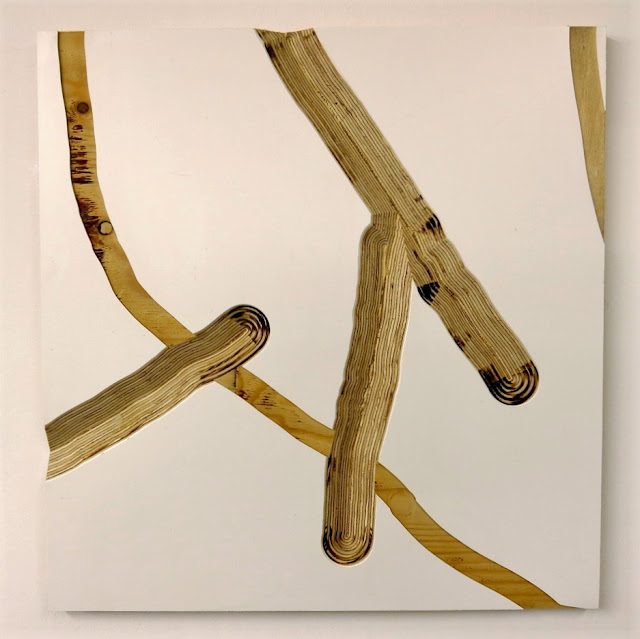 DJ Simpson arrives at a distinctive language by combining the found object with expressive gesture, so riffing on both conceptual and painterly traditions. He uses an electrical router to cut into and expose a layered support, ‘drawing’ or ‘painting’ by an industrial means which sculpturally removes the surface instead of marking it. 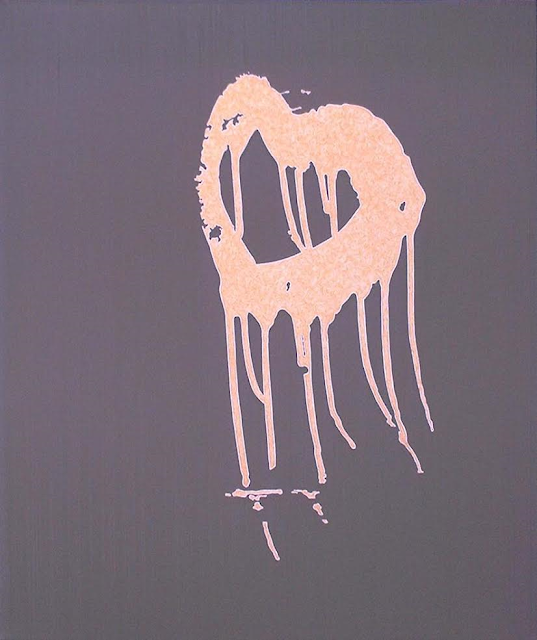 
Oil on linen - 66 x 56 cm
Here Jonathan Parsons transcribes a photograph of a found gestural form onto canvas, masks the shape with tape, and then applies what appears to be the 'background' colour so that a ‘reverse painting’ results: made in the opposite way to the spontaneous original and flipping the relationship between 'figure' and 'ground'. 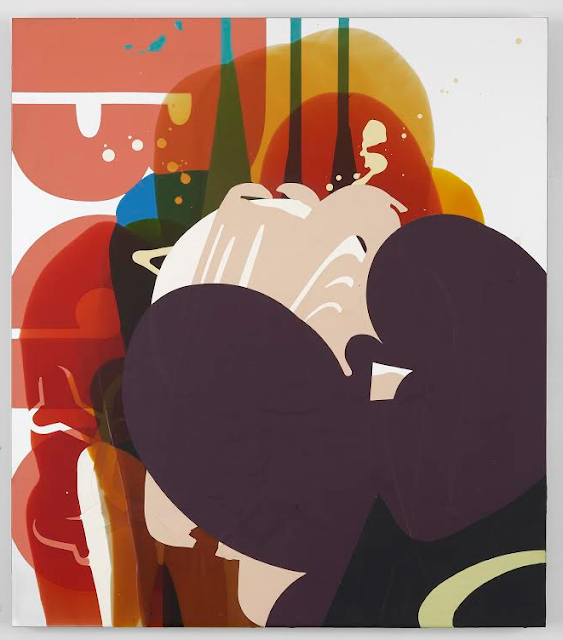 Michael Stubbs makes his paintings on the floor either by pouring household paint and tinted varnishes or by painting stencilled motifs onto coated boards (in this case mirrored aluminium) or placing stencils in the pour to be removed after drying. The resulting simultaneous optical effects suggest the layered screens of computing. 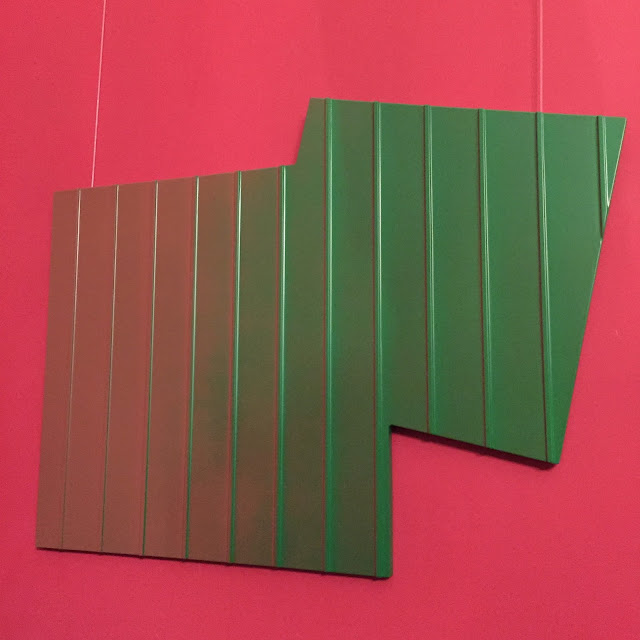 Neil Zakiewicz often outsources the spray painting of his MDF constructions to a car workshop. He provides just a rough 2D sketch as the plan, and so cedes control of how the raised elements in his carpentry will generate irregularities. ‘Slim Chance’ is cut to suggest movement through two squares that are separating or merging. 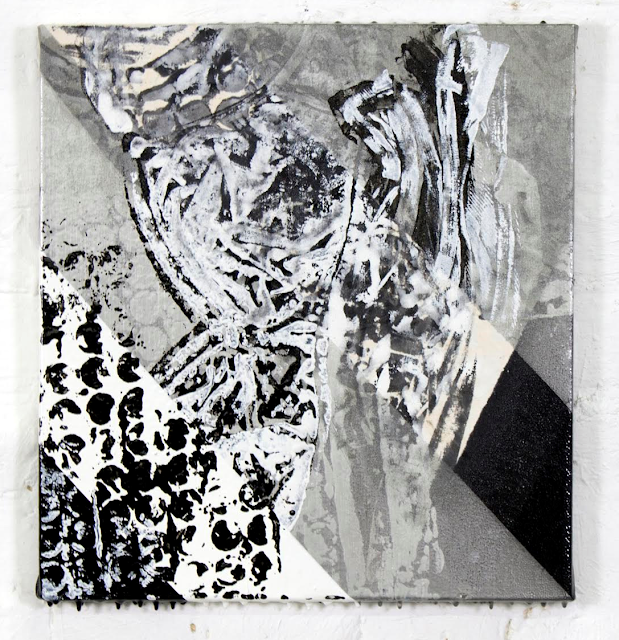 
Shane Bradford has long used dipping as a method of painting, evidenced in ‘Bluechist’ by the small stalactites at its edge. This is combined with a more recent method of printing from used clothing soaked in emulsion: so geological time meets personal time in a series named by types of rock. 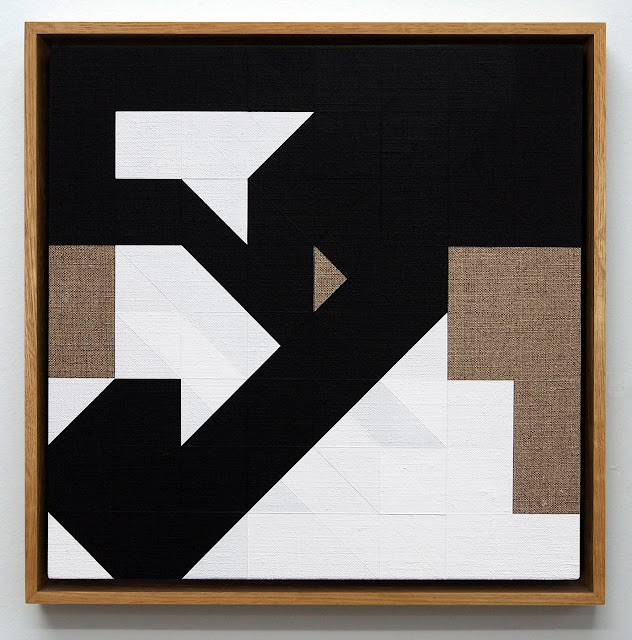 Tom Hackney depicts the chess games of Marcel Duchamp – who famously claimed to have given up art for the game – by translating each move into a layer of black or white gesso. If no piece passed, a square remain unpainted; if many did, a sculptural relief is formed on the grid. 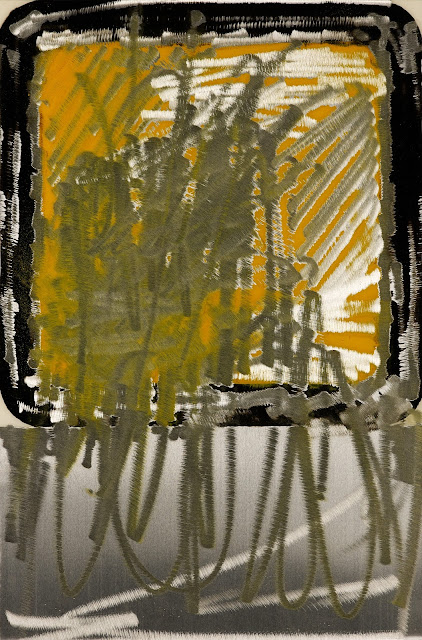 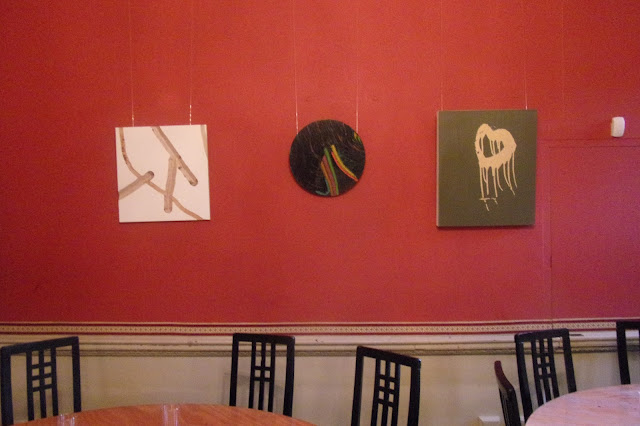 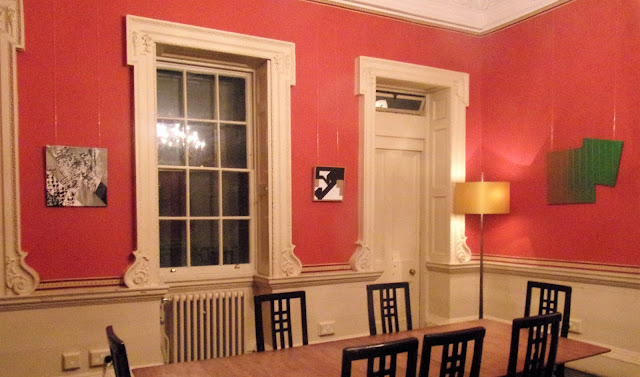 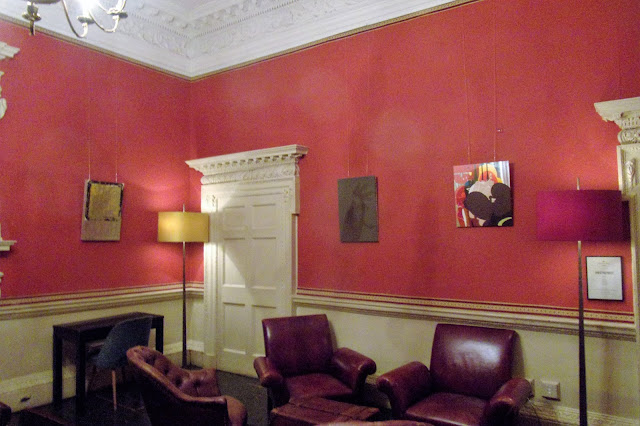 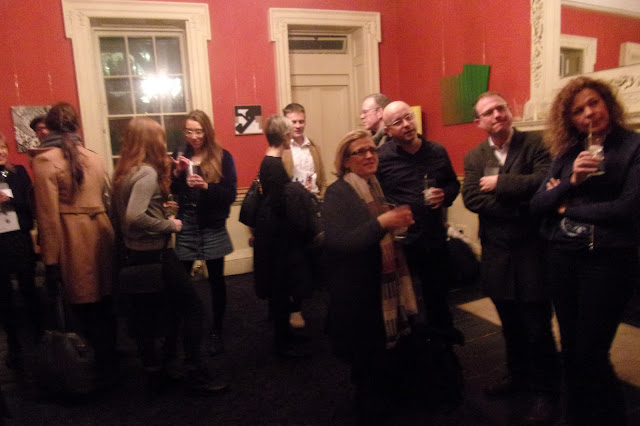 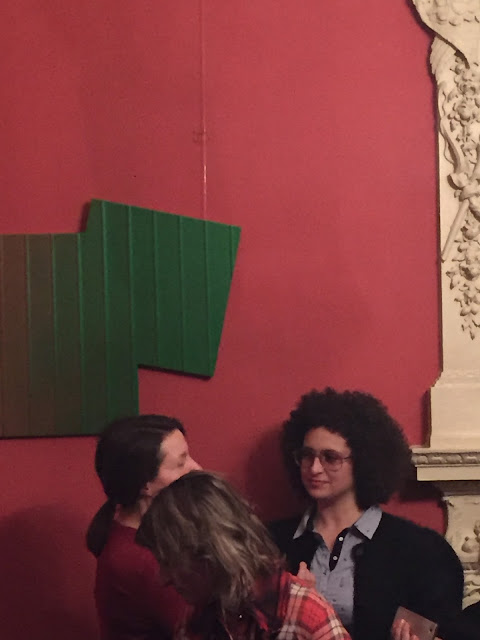 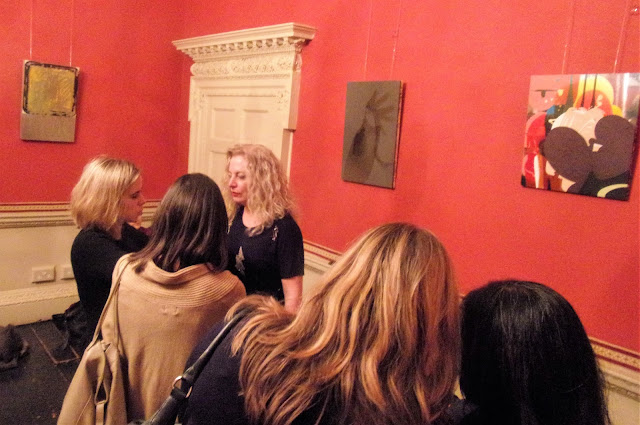 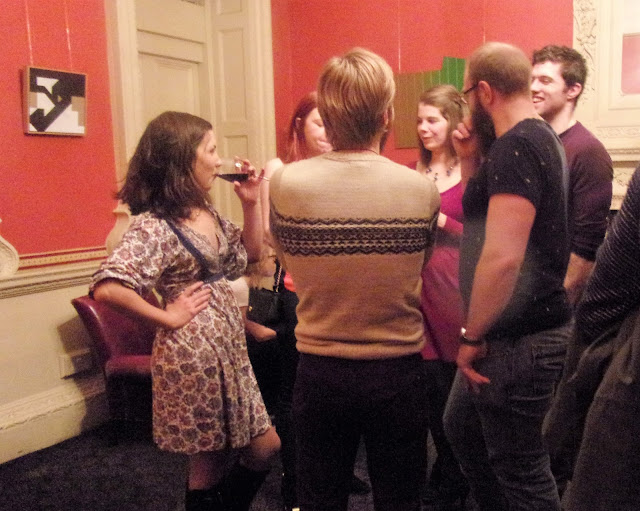 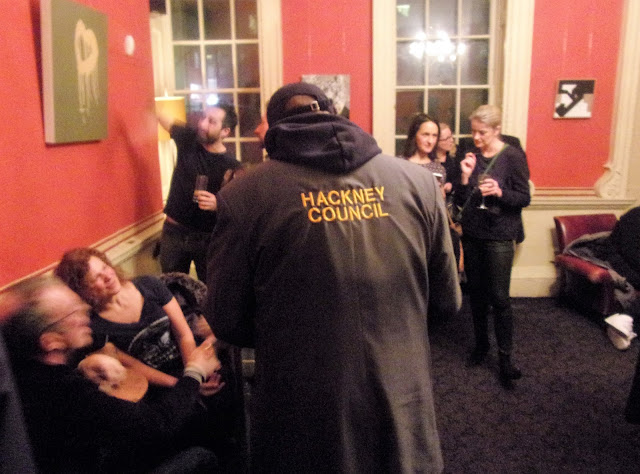