All works for sale - enquiries via HoSB as above or paulcareykent@gmail.com

We always wonder: what's happening on The Other Side?  First, perhaps, we'd better sort whether were looking in or out. The Silk Room has an attractive window of its own, but Aglaé Bassens gives us more. Are we the looker in or the subject of the gaze? And - if the former - what do we see? Martine Poppe explores our interaction with the camera from the other side of the pond. Emma Cousin, in a different avoidance of the full view, is currently concentrating on legs - and on the other side of this room's potential uses, as a place of meeting, eating and dancing. As indeed, does Jane Hayes Greenwood. Her figures seem to be the other side of flesh and blood - more objects, diagrams or images of images than people, though that doesn't seem to restrict their appetites. All in all, then, it's a puzzle to know where to look and what to make of the characters we find in this pattern-heavy room of four representational female painters, just the other side of the real, perhaps, and just the other side of the wall which divides them from nine male abstractionists tackling the Bazalgette's rich red. Which other side, you might ask, are you on? 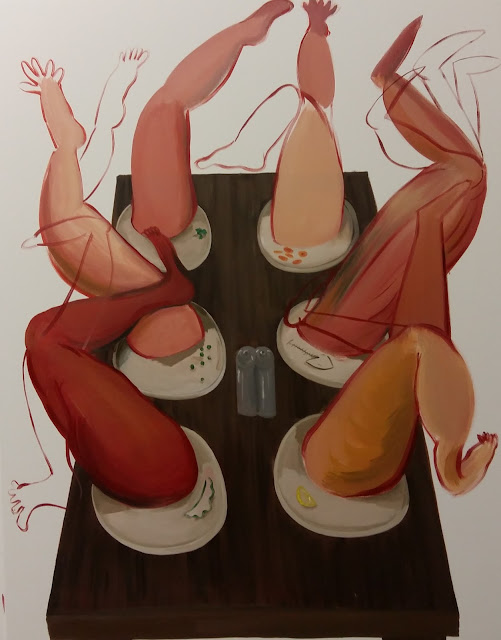 Emma Cousin (born Dewsbury, 1986) is currently in residence at Wimbledon College of Art and co-organises the curatorial platform Bread and Jam. Her paintings have recently moved from quirkily spinning off a variety of homespun narratives - often with a lively awareness of the body's contingencies - to concentrate on charmingly eccentric explorations of our lower limbs in particular. Cousin's work has an immediate force of personality: even without the benefit of faces, you sense the artist behind them. They have the energy and some of the moves of cartoons without looking at all like them. The conversational titles - Cousin is also a poet of some vim - cue you in to everyday phrases which, together with their pictorial retelling, make up a freshly minted 'language of legs' (in which 'business' is spelt 'beesknees'.). 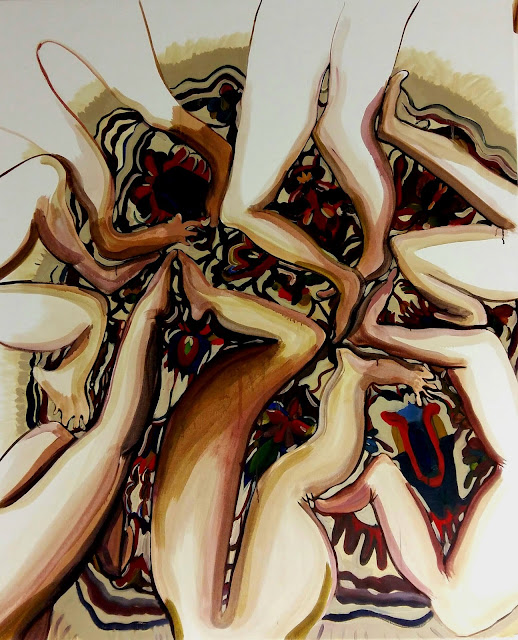 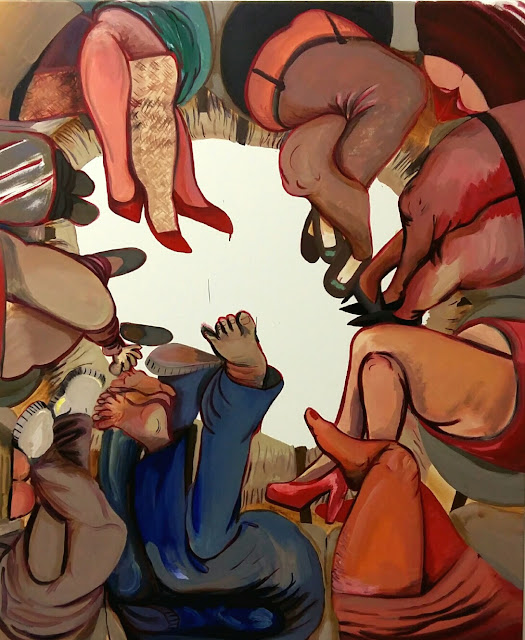 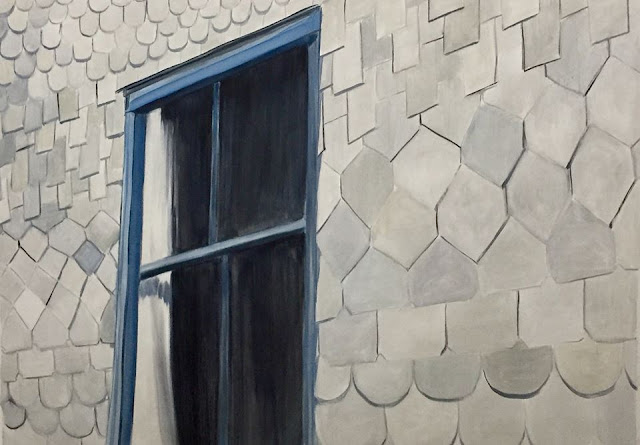 
Franco-Belgian Aglaé Bassens (born Mons, 1986) has a way of making something out of nothing by gracefully uncovering the atmospheric melancholy in such 'non-subjects' as empty fish tanks, shirts and sofas so that, in her words, the paintings 'oscillate between presence and absence, the revealed and the concealed, the available and the inaccessible'. Like Poppe, she paints much less objectively than a cursory glance suggests, as her characteristically long, swift strokes bring character to the would-be-minimal. For 'The Other Side' Bassens uses apparently viewless windows and contextless curtains to both reflect on the flatness of the pictorial canvas surface versus the depth of illusion of a painted image, and to comment on how we divide space and create boundaries both physically and socially. 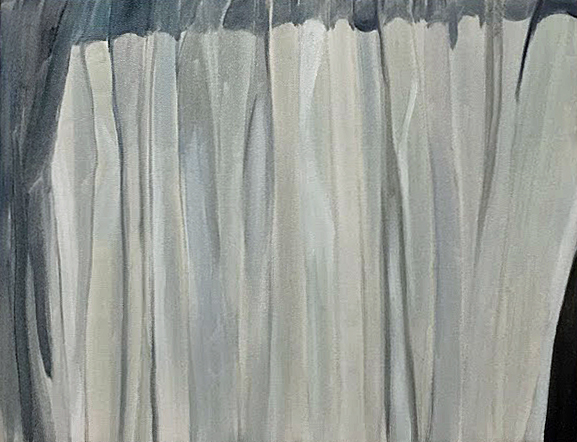 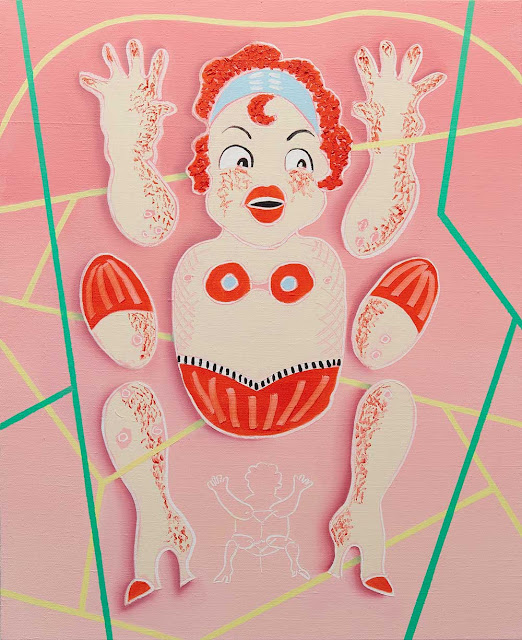 Jane Hayes Greenwood (born Manchester, 1986) is the Founding Director of Block 336, an artist-led project space and studio in Brixton and a Fine Art tutor at City & Guilds of London Art School. Like Cousin, she responds directly to the presence of a dinner table in the Silk Room. That suits the recent development in her work from exploring the nature of objects and our relations to them, to feeding gastronomic and erotic imagery through a distorting lens, drawing our attention to sex and food as parallel areas of consumption.  There's something logical yet comic about the way she sets these two appetites in dialogue,  exploring them via their cultural representations -  and makes us wonder, through sly art historical references, just where our desire for aesthetic experience fits in. 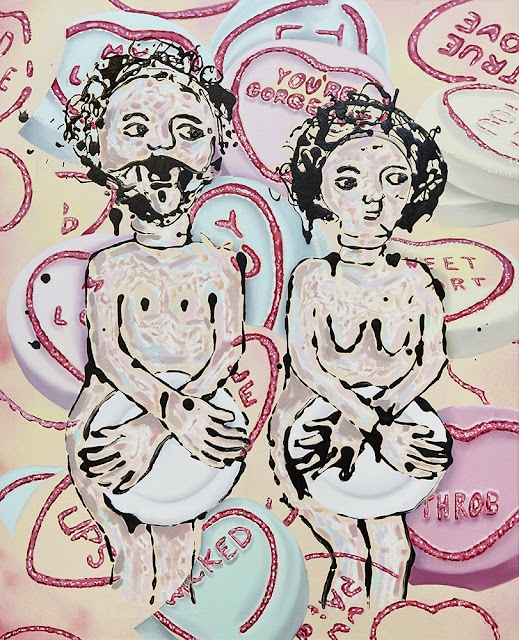 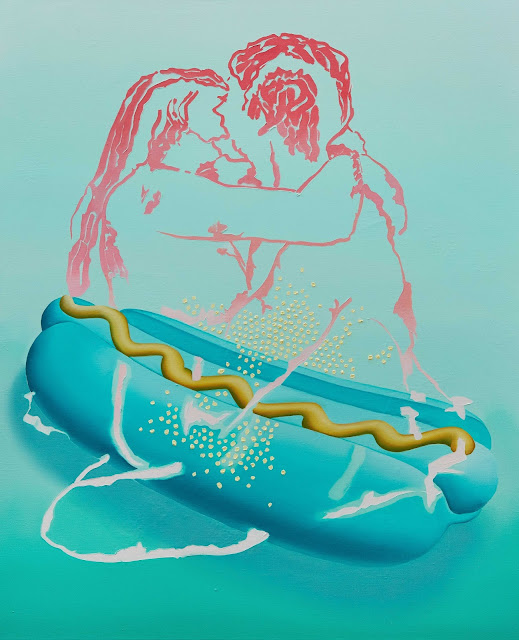 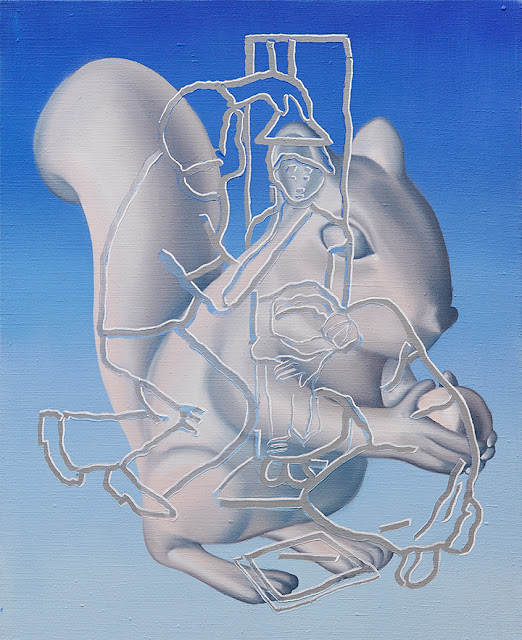 A little paradoxically, Martine Poppe (born Oslo 1988) explores the impact that the new millennial ubiquity of photography has on our lives by using alluring painting techniques to negotiate between the mechanical and handmade. She has previously veiled the surface by painting opalescently on polyester restoration fabric, so turning the underlying image ghostly. Here, noticing how behaviour can change when a group of people realise that photographs are being taken, she supplies 'before' and 'after' shots she took of a voter and a protest group around the recent US presidential election. They typify individual and social engagement with both image-making and politics. In line with that more direct engagement, Blue and Brown combine photographic ink transfer and paint on the same surface, ramping up the immediacy. 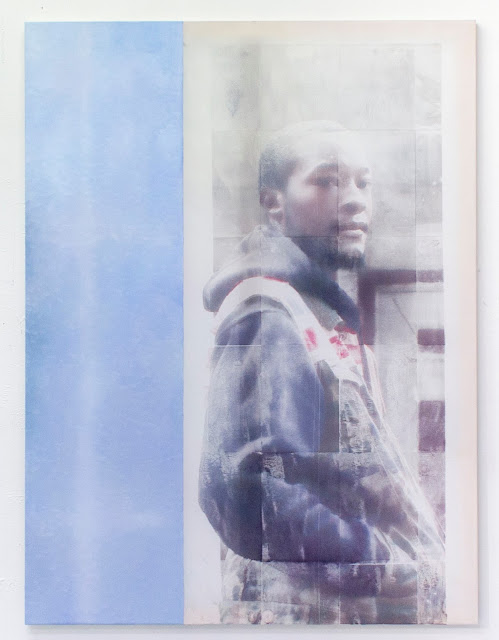 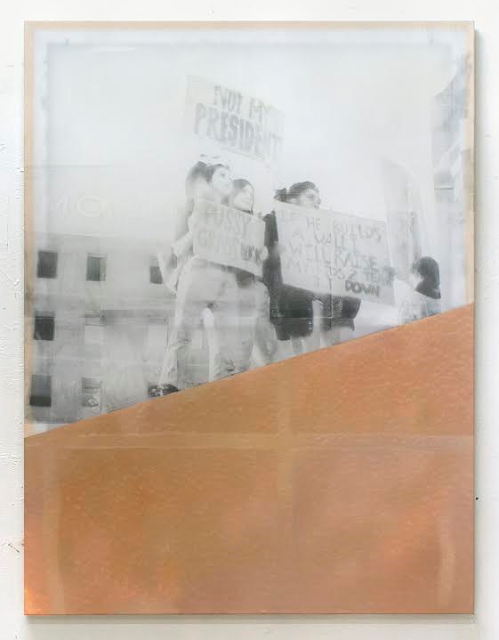 Oil and ink on taffeta 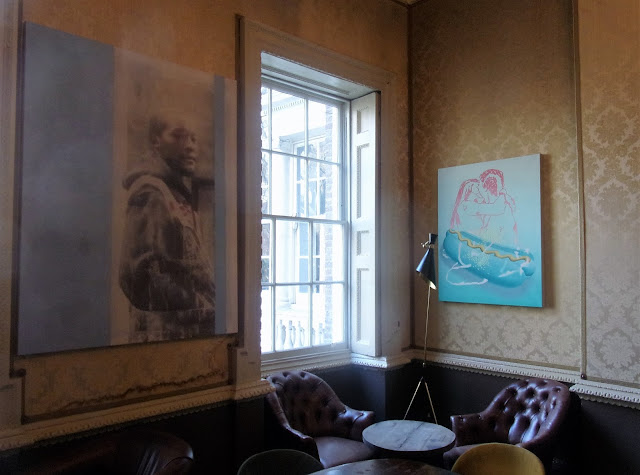 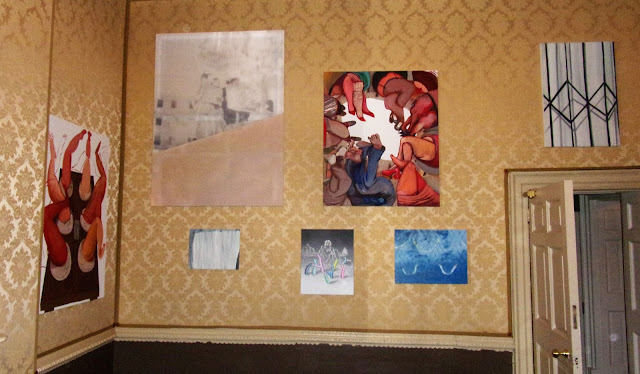 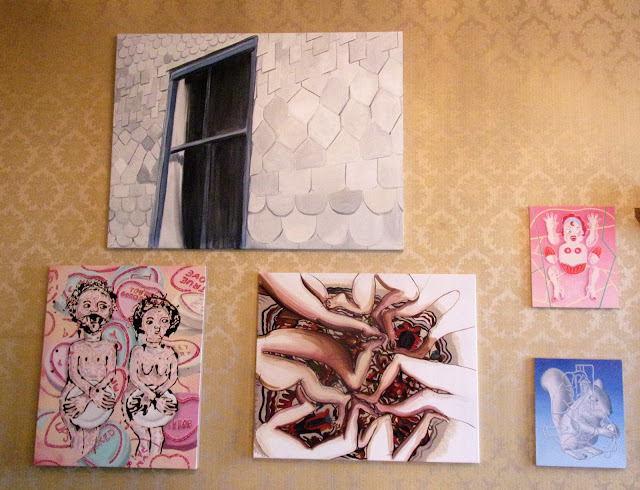 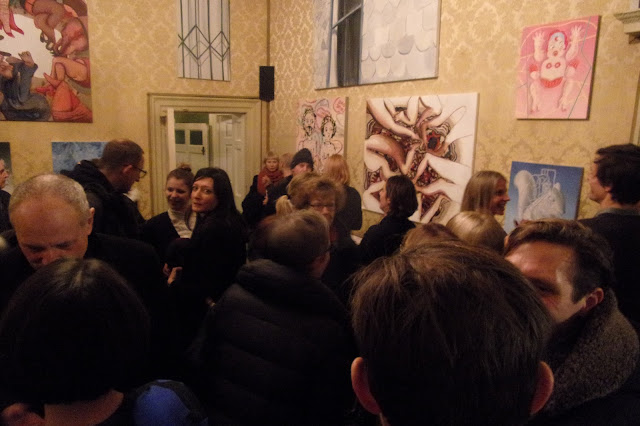 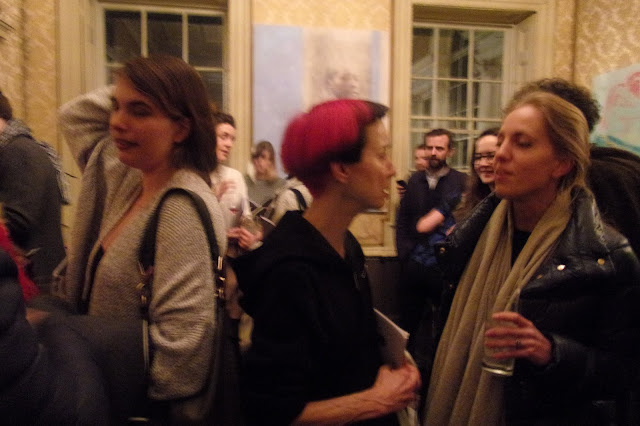 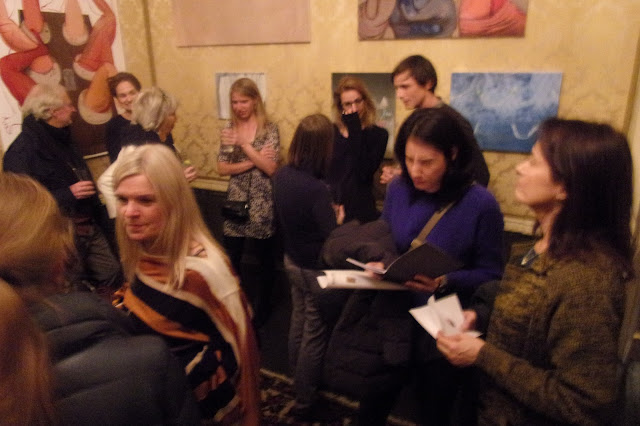 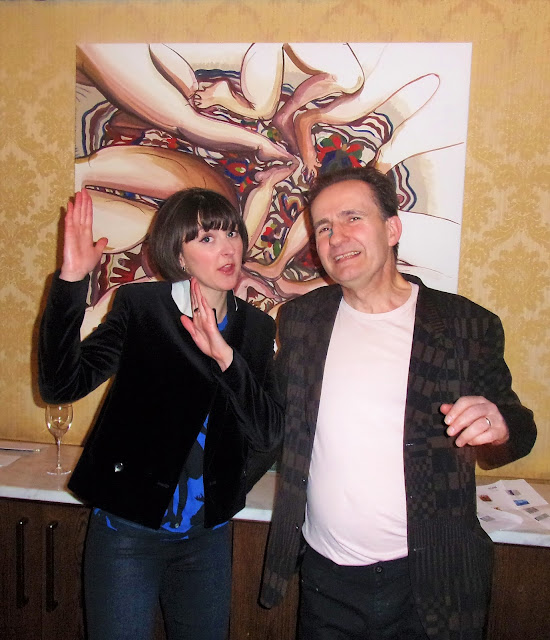 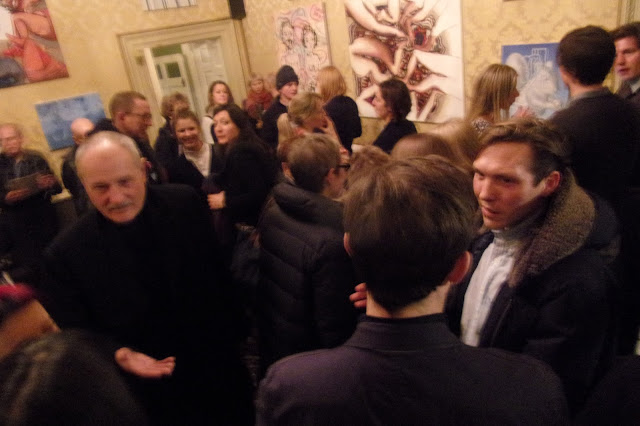